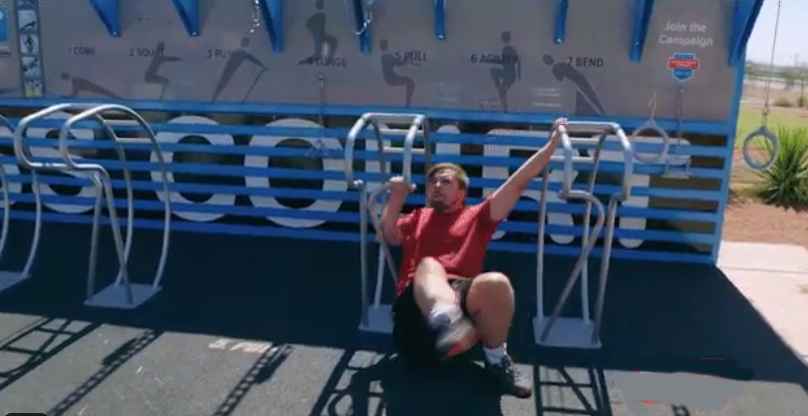 Following his break-up with Jess Caroline, 90 Day Fiance star Colt Johnson has decided to make himself into a new man. Let’s face it, the guy has a whole man-boob thing going on, but his methods of getting in shape likely won’t work. However, fans did get a few good laughs out of Colt’s exercise routine on Sunday’s episode of 90 Day Fiance: Happily Ever After?

Having ruined yet another relationship, with some help from his mom, Debbie, Colt Johnson has hit the gym. He has been working on his “revenge body,” no doubt ready for the next foray into love. The only thing is, the gym was actually a play park. Also, Colt has no idea how to use the exercise bars. However, Johnson did enroll his good friend Steve, the fitness guru, on his journey.

While fans watched Colt working out on Sunday’s episode, they also got to see him throwing up into a trash can. Many commented at the time, telling Colt at least he tried. This particular episode didn’t feature much of Colt compared with last week, but what was featured was truly hilarious.

Fans will remember in last week’s episode of 90 Day Fiance: Happily Ever After? Jess famously dumped Colt. This was after finding out he was sexting eight other women while in a relationship with her. The final straw came as Colt told Caroline that his “good friend” Vanessa had moved in with him and Debbie.

What made things worse for Colt was that after Jess walked out on him, she met up with his ex-wife, Larissa. The two Brazilian beauties had a lot of fun, describing his private parts and his mother, Debbie. Now they are the best of girlfriends.

After a disastrous reunion with Colt, Jess has another visit to make during her trip to Las Vegas…#90DayFiance

While Colt lost yet another woman in his life, he did make a great new friend, Steve. Between them, they both agreed that Colt should stop letting his mom, Debbie interfere in his relationships. However, Steve also got Colt involved in a new exercise routine to shape up for the next relationship. As noted by Screen Rant, this is where the real fun begins.

The September 13 episode revealed Colt trying to play hopscotch in an outdoor gym. He says, “Ever since my breakup with Jess, I’m at a weird spot in my life. I don’t really like what I see in the mirror.” Many female 90 Day Fiance fans can no doubt agree. Johnson went on to say he has decided to work on himself, “try to lose weight and just be healthy.”

Colt thought the bars for dips were slippery🥵 #90DayFiance pic.twitter.com/NQiX4MfNZK

Following the hopscotch, Colt has a go on the gymnastic rings where he keeps slipping. He then heads over to the trash can where he repeatedly throws up. Steve then comes along to give him some help. He also speaks to the camera about his friend. Steve says, “Colt has a lot of self-destructive behaviors. He really needs to dig deep internally and figure out who he is as a person.”

Colt admits he is thankful to have Steve as a friend, as he is alone again since Vanessa moved out of the house. Johnson is now planning to take Steve’s advice and confront Debbie about her interference in his life. Fans can look forward to that in the upcoming episode of 90 Day Fiance: Happily Ever After? While waiting, fans can keep themselves amused watching Colt working out. Catch the next episode on TLC on Sunday at 8 pm ET.