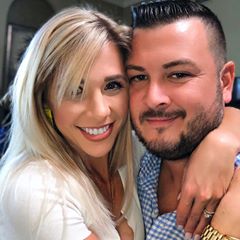 90 Day Fiance star Charlie Potthast has been getting blasted on his Instagram page! He doesn’t seem to be making excuses for his behavior!

Fans of 90 Day Fiance has been watching the drama between Andrei Castravet and Elizabeth’s immediate family. Elizabeth, who is also known as Libby, has been caught in the middle of this feud and seems to always have to defend one the side against the other.

In a past episode of 90 Day Fiance fans Jenn Davis, Elizabeth’s sister was shown criticizing the feast Andrei’s mother had prepared for Elizabeth’s family when they arrived in Moldova to attend Elizabeth and Andrei’s second wedding. Charlie Potthast and his father often got in on the jokes and rude comments by talking about having grey and dreary Moldova is.

Elizabeth’s mother, Pamela, often agreed with and went along with any disgusting comment that her family spewed out. She even agreed with Charlie, Jenn, and chuck called the beautiful dinner Andrei’s mother prepared as “peasant food.”

In the most recent episode of 90 Day Fiance, Charlie Potthast takes the mic at Andrei and Elizabeth’s 2nd wedding, and proceeded to insult Andrei in front of all of their friends and family! This caused a fury of comments attacking Charlie on his Instagram page.

Charles has had tons of people taking to his Instagram to let them know how disgusted they were with his attitude at Andrei and Elizabeth’s wedding reception. One comment read “Wow, I feel embarrassed for you. The amount of disrespect you have shown on these last few episodes is disgusting and insanely classless’. and that’s not all! Love how he is judgmental but got the silver platter handed from daddy. Privileged folks voicing their opinions.” Wow, the comment is coming in hot and heavy! Ok, lets read a few more!

Another comment reads “What seemed to me is that you were super jealous of your sister’s wedding. The fact is, they love each other, and she likes the way he is. He is a good dad and husband for her. He doesn’t cheat on her, doesn’t beat her. So you guys should be happy that she is happy. You were so disrespectful. I hope by this time you started to be more respectful towards your sister’s marriage, they have a baby. Put yourself in her shoes.”

Not all were upset

Charlie does have a few people to praise Charlie about the comments he made. One comment is “you say it like it is wohooo”, another poster writes “I salute you for what you do on that show I would be the same way with my fam.” Let’s look at the next positive comment, oh, sorry those were the only two.

Charlie Potthast hasn’t responded to these comments. Make sure you don’t miss new episodes of 90 Day Fiance on TLC.