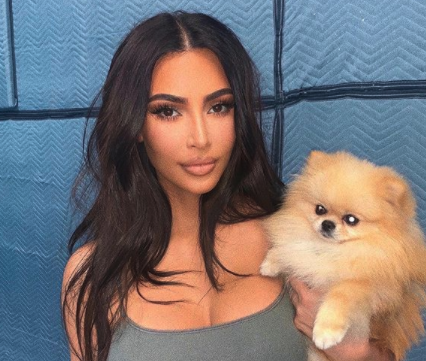 Kim Kardashian is not listening to the haters. People have been hating on Kim’s new line from SKIMS and she is sticking up for what she has created.

This all started when Kim Kardashian released a maternity line to be apart of her shapewear company, SKIMS. She is creating the maternity clothing to support women both during pregnancy and after. In addition, there is also a bra that opens on the front, perfect for breastfeeding mothers.

She has been receiving a lot of backlash though. People are telling her that pregnant people should be embracing their bodies, not using shapewear to hide them.

According to Yahoo!, Kim isn’t taking that well. Kim notes that if someone doesn’t like the line they may not have been pregnant before. She says that carrying all the weight around is difficult and that’s why she is creating the line.

“To anyone who has an issue with maternity solution wear, and if you haven’t been pregnant before you may not know the struggle of what it’s like carrying all of this weight the way I did along with millions of strong women, @skims maternity line is not to slim but to support,” Kim reveals in a Tweet.

It’s great that Kim is making it clear that the line just exists to support women, not to slim them down.

To anyone who has an issue with maternity solutionwear, and if you haven’t been pregnant before you may not know the struggle of what it’s like carrying all of this weight the way I did along with millions of strong women, @skims maternity line is not to slim but to support.

She started a Tweet thread, explaining the new shapewear in further detail to anyone that may be confused.

“It provides support to help with the uncomfortable weight being carried in your stomach which affects your lower back and the compression on the leggings helps with pain relief caused by swelling,” Kim says. “It is also worn after you have given birth and provides the comfort and support that most women need after delivery especially if you are recovering from a cesarean.”

Despite all the negativity, Kim says she has gotten a lot of support from women all over the world who are actually pregnant right now.

“Based on the majority of positive feedback we have received so far from pregnant women around the world, I am incredibly proud to provide a solution that will provide comfort and support during the times that we all need it most, during pregnancy and after.”

The Good Place star Jameela Jamil was one to speak out about what Kim had created. She noted that if she ever got pregnant, she would not be hiding her body in shapewear.

“If I ever have a baby I’m welcoming the stretch marks, the new curves and I’m sure as s–t not gonna rush to try and snap back, I’m just gonna let my body heal from the Massive event that has occurred inside my body,” she says.

There is no telling if now that Kim has cleared things up if Jameela will change her mind. Right now, she seems passionately against the line.

“You don’t need an even more awkward obstacle between you and a p*ss. You just need to try and ride with this miracle and do your best to be as happy/comfortable as is possible within your circumstances. Pregnancy is hard enough, with enough worries already,” she says.

Do you think this is a good idea from Kim Kardashian? Or, do you think it’s too much for pregnant women? Let us know in the comments below!