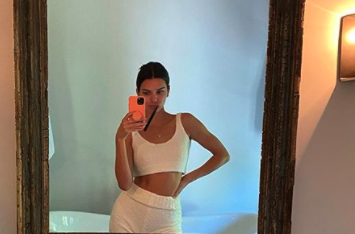 Kendall Jenner is revealing a side of herself not many would know. Apparently, the model smokes marijuana.

The use of marijuana is legal in California, so it doesn’t come as a surprise that many celebrities take part in using it. Apparenlty, Kendall Jenner is no different People says.

Kendall was on an episode of Sibling Rivalry with Kate Hudson and Oliver Hudson where she opened up about her habits.

Kendall was apart of a lighting round of questions on the show with her sister, Kourtney Kardashian. One of the questions said, “if there was a stoner [in your family] who would it be?”

Apparently, both Kourtney and Kendall agreed that it would be Kendall. After that, the model went into a bit more detail. She says that nobody really knows this about her.

“I am a stoner,” Kendall said. “No one knows that, so that’s the first time I’ve ever really said anything out there.”

Kendall didn’t go into any details on why or when she uses the drug, however she does suffer from severe anxiety. It could be a coping mechanism for her. Or, she could simply do it recreationally. Either way, it was interesting to hear her reveal something new about herself.

Despite Kendall getting high, apparently they label Kylie Jenner the least judgemental in the family.

Not only has Kendall recently reviewed her Marijuana habits, but fans have seen her out with a new man as well.

“Kendall is having fun with Devin and seeing where it goes but she’s not seeing anyone else and neither is he,” a source reveals. “Before he left for the NBA bubble he was part of her bubble and then the whole time he was away they kept in touch and now that he’s back they’re spending a lot of time together again.”

There’s no telling how things will go after the pandemic though. Normally, Kendall is far too busy to have time for things like relationships. Once the pandemic ends, she may go back to not having time for Devin.

Do you like Kendall Jenner and Devin together? Let us know your thoughts in the comments below!

Todd Chrisley Issues Statement On Lindsie & Will’s Divorce
Blayke Busby Pampers Her Cousin With DIY ‘Spa Day’: See Charming Video
Will There Be ‘When Calls The Heart’ 2021 Christmas Movie?
Nanny Faye Says ‘Free Britney’ And Fans Are Here For It
Audrey Roloff Tells All: Does She Want More Kids After Number Three?