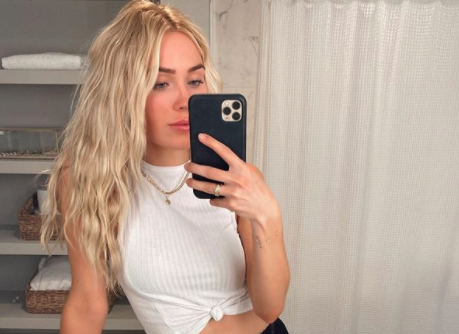 Cassie Randolph and Colton Underwood broke up, and it doesn’t seem to be going well. Cassie had to put a restraining order on Colton. Now, sources are talking about how that makes her feel.

Cassie had to file a restraining order against Colton. Apparenlty, she doesn’t feel too great about it. However, according to E!, he was stalking and harassing her. There are even reports of him putting a tracking device on her car to see where she is going or showing up at her apartment without being invited. In addition, apparently he went on several walks around her apartment. These definitely sound like reasons to be concerned, her restraining order makes sense.

Despite all of this, a source says Cassie is sad that it ended up like this.

“Cassie is really upset that she had to file a restraining order. She didn’t want it to come to this,” the source reveals according to E!.

Apparently, prior to this, the two were filming a reality TV show. However, Colton clearly still has feelings for Cassie, so he dropped out of the show. Now, she is still trying to sell the show.

“Things got really tough so Colton pulled out,” the source reveals. “Cassie is still trying to sell the show. Her family is also in it. When they broke up, she tried to keep it just friends, but his feelings never went away for her. She did like the attention, so it was very hard for him.”

There’s no telling if the show wills till take off or if anyone would even be interested in it without Colton involved.

Feeling so grateful today for officially landing my second to last graduate externship! It’s crazy to think that I’m in the final stages of this program already. When COVID hit, I was nervous about possible delays, so I’m extra thankful 🤍 Let the countdown of my final stretch begin!

The order caught him off-guard

It’s really no surprise that Colton wasn’t expecting this restraining order from Cassie. After all, is anyone really expecting one? Apparently he wasn’t even around when it happened. A source reports that Colton was hanging out in Colorado when he got the surprise.

“He’s been in Colorado and this was all a surprise. He was completely blindsided,” the source reports.

He allegedly did end up admitting to putting the device on Cassie’s car and following her location. Apparently this all stems from Cassie hanging out with her ex-boyfriend after she and Colton split.

“She was in touch with her ex while they were together — the guy that she met on the other reality show she was on before The Bachelor.” The source says, “She was seeing him after they broke up.”

Were you sad to hear that the two split? Let us know what you think in the comments. Come back to TV Shows Ace for more news on all of your favorite reality TV stars.