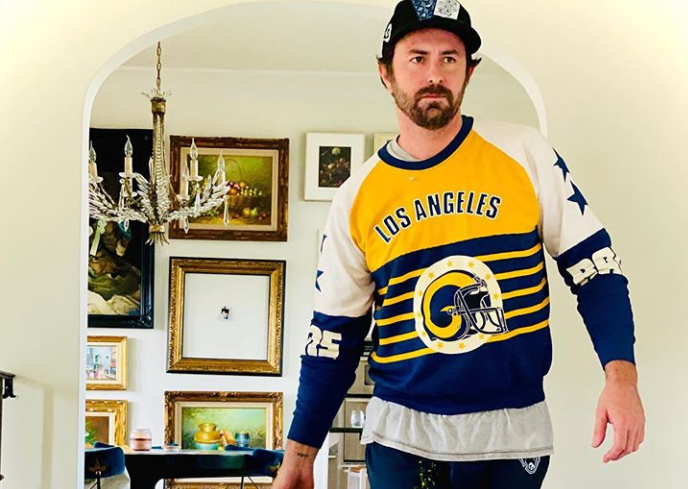 Stassi Schroeder has been staying out of the spotlight since controversy saw her fired from Vanderpump Rules. The man in her life, Beau Clark, drew attention to himself on Instagram with his enthusiasm for his football team. Beau captioned his ode to football, “walking into this 2020 @rams season like.”

He’s wearing a full Rams outfit, sporting blue and yellow. He’s dragging a large plastic tote full of what looks like more sports clothing. Beau finished the look with sandals. He appears to be channeling a model with a serious look on his face as he walks the imaginary runway. A lot of his fans trolled him by reminding him how much they hate him during football season. Several commented that they loved the Cowboys.

I LOVE my Designated Driver!

Clark Is Excited Football Is Back Like Most Fans

Beau Clark held nothing back as he shared his excitement for the Rams. One fan said, “Beau! Take off those sandals! You are not 70!” Austen Kroll of Southern Charm said, “The man the myth the Birkenstock legend.” As shown in the above picture Beau is really loving Stassi Schroeder being pregnant because she can be his designated driver. Stassi looks less than enthused to do the job.

The couple recently spent time with their former Vanderpump Rules co-stars Katie Maloney and Lala Kent. Amid the controversy and the pandemic, Beau posted a picture on a boat holding a solo cup. He said everyone tested negative for COVID and were quarantined on a houseboat. Beau edited his original post to include that information. One fan said it was unnecessary. They said, “you shouldn’t even feel the need to justify why you’re out enjoying yourself!” Fans also have begged Stassi to post more pregnant pictures because she’s been laying low.

For fans who didn’t know, Beau Clark, is soon to be the father of a little girl. He posted a picture of several parenting books he’s reading. Notably one is, “Oh Boy, You’re Having A Girl.” Cleverly in the picture with almost a dozen books, he captioned it, “did I get em all?” On the reveal where he’s holding a cute pink onesie that says #OOTD, he posted a sweet message. He said, “I was raised by great women, and the lessons I learned from them I’ll FW to my daughter and then some!”

Additionally, Beau shared a video of a fire he said is really close to the house he shares with Stassi. According to Reality Blurb, he said, “not my video but right by our home.” The father-to-be is anxious about the fires and their bundle is due in less than five months. Fans will be keeping up with his posts and sending good vibes their home stays safe during the fires.