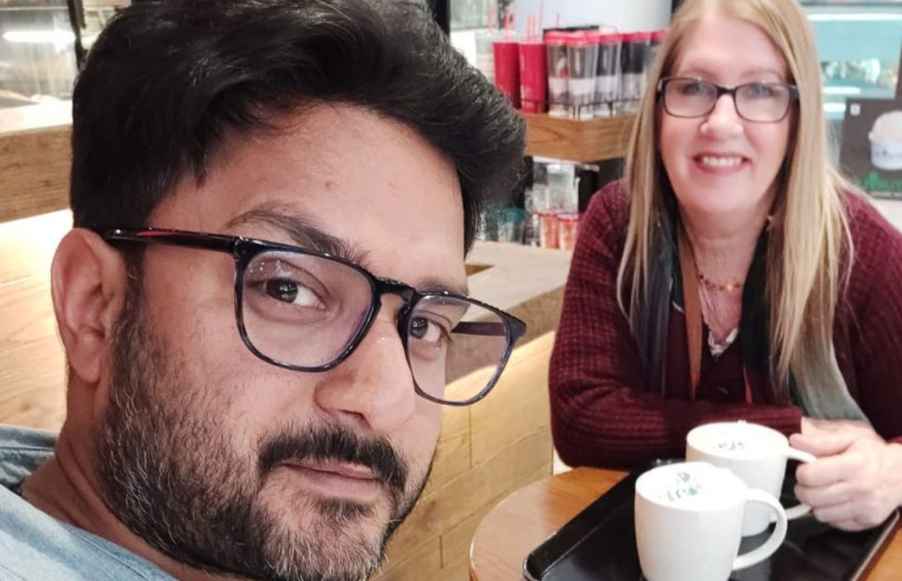 The world of social media is full of catfishing stories. As we all know, it is easy to post an image of a gorgeous actor or actress as your profile picture. This has also been encountered before in the 90 Day Fiance franchise, famously with American star Yolanda and her alleged British lover, Williams. While Jenny and Sumit are probably still together on 90 Day Fiance: The Other Way, it turns out their relationship also began with a catfish.

Most people would say 90 Day Fiance star Sumit Singh isn’t a bad looking guy. However, it turns out he was into using images of handsome actors on Facebook to lure a potential mate. While he pretended to be one “Michael Jones” to his online audience, he was actually using images of actors like Ranbir Kapoor and Alex Bourne.

90 Day Fiance: The Other Way is currently on midseason break until October. This hasn’t stopped the constant criticism against Jenny and Sumit on social media. This is since Sumit’s parents, Anil and Sahna, appeared on the TLC reality show. This revealed a number of lies in Jenny and Sumit’s storyline.

Anil and Sahna opened up on 90 Day Fiance to say they had met Jenny in 2013 on a visit to India. She stayed with the Singh family for a number of months, while Sumit’s family believed they were “just friends.” They were shocked to find out these “Facebook” friends were definitely more than that. Both parents disapproved of the relationship due to the large age gap. In fact, Jenny, 61, had become close friends with his mother, due to their similar age. Meanwhile, Sumit is a mere 32 years of age. Despite this, eventually, Jenny went home and Sumit found himself in an arranged marriage.

The fact Sumit was married to someone of his parents’ choice was hidden from Jenny. In between, of course, Jenny moved to India only to find out Sumit was married.  However, their online relationship continued as before with Sumit finally getting a divorce.

Is Jenny and Sumit’s relationship based on a lie?

However, it seems the pair have known each other longer than that. Just how long have they been conversing on social media prior to their first meeting? This is where Sumit is again guilty of lying to Jenny. In fact, it turns out the foundation of their whole relationship is based on a lie.

For a year before Sumit told Jenny his true identity, he was catfishing her on Facebook under the false name of “Michael Jones.” Eventually, Sumit did reveal his real identity, which Jenny accepted. However, that fake profile still exists, complete with an image of a younger-looking Jenny as its cover image.

Fans who remember season one of 90 Day Fiance: The Other Way, will recall Jenny telling the story of Michael Jones. At the start of the season, Jenny explained that he had received a friend request from one Michael Jones. She said he looked like an Englishman. “Dark hair, very tall and thin.” According to his profile, “Michael” was 25 years of age and she says she accepted his friend request. They both started messaging right away.

The earliest profile image is that of Alex Bourne, husband to singer Rachel Lauren Steven. He later updated it to an image of Indian actor Ranbir Kapoor. Scrolling through the posts, Jenny’s first comments appear on another image of Ranbir Kapoor from July 4, 2012. She wrote, “how about a more recent pic???” The catfish who calls himself Sumit said “n dis pik is olmost 15yrs old when i was 19.” However, later on, he shares another image of Bourne which he claimed was taken with his cell phone. This appears to convince Jenny enough to wish him “Happy 4th.” The various posts continued.

By July 25, 2012, “Michael” and Jenny are calling each other “my wife” and “my hubby,” showing how fast the relationship was escalating. While Sumit continues to update his profile with photos of Alex Bourne, Jenny eventually gets suspicious. She wrote, “it looks like it came from a magazine,” to which Sumit replied that he was not a cover model.

We gonna be off for 6 weeks. 😭😢Damm #midsesonbreak. So coming episode will be the last one and then you won’t see us for 6 weeks. #stayconnected #dontforget us #wewillbeback and please don’t ask for the spoilers 🤐🤣🤪. #90daysfiance #90daystheotherway #season2 #tvshow #realityshow #tlc #missyoutoo #loveall 🤘🏻🤘🏻

From browsing Michael Jones’ timeline, it looks like Jenny finally found out his true identity in August, 2012. When Sumit reveals his identity, saying he is “guilty,” Jenny is quick to forgive. She writes “I [know] u are guilty but i forgave u so lets just move on okay.”

“Michael” makes his last post on September 12, 2012, so it looks like he continued his online relationship under his own name. While many might believe Jenny to be gullible, the couple has been in a relationship for eight years now, so it seems like the real thing.

Fans will remember 90 Day Fiance: The Other Way returns to TLC this October.