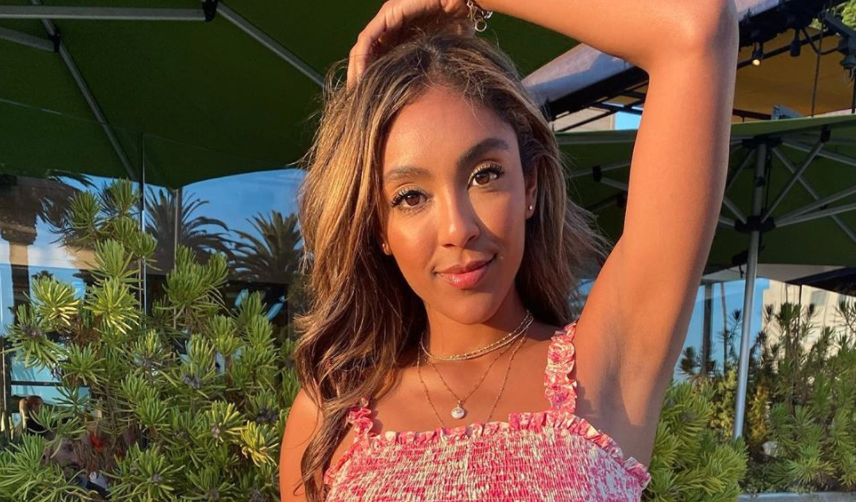 Tayshia Adams took over for Clare Crawley on The Bachelorette. Now, she has returned to social media and fans are already speculating what happened on her season.

The Bachelorette filming must be over because Tayshia Adams has returned to social media. According to E!, Tayshia was offline for an entire month while she was off looking for her husband.

The first thing she did? Post on her Instagram story of course. What better way to connect with followers? She posted a selfie of herself with a little bee sticker on her nose. In the photo she is enjoying dinner at Nobu. She captioned the post: “Nothing like home.”

Fans noted that soon everyone will begin speculating about what that photo means.

“Time for endless speculation about the bee,” someone comments.

Not much is known about how the season will go. No one knows yet if Tayshia was able to get engaged. She could be engaged right now or just as single as before.

#ad You never know what tomorrow will bring! ✨Sometimes you just need to kick back appreciate the sweet things along the way, like beaches + sunsets + best friends + @smirnoffus Zero Sugar Infusions cocktails. 🍉🌱 This is what dreams are made of! 💚Head to my stories for more detail on these simple summertime recipes… #summercocktails

Tayshia started the season after Clare Crawley left because she was already in love. Then, her first impression rose of the season went to Spencer Robertson. However, apparently he didn’t even end up making it to the final four. So, his first impression must not have lasted very long.

So far, there haven’t been any promos released with Tayshia featured. There have only been promos with Clare. The Bachelorette has never done anything like this so it’s hard to know how they will handle the situation. It appears that for now, they are trying to keep it a “secret” even though it was clearly leaked as everyone knows about it.

All that matters at the end of the day though is that Tayshia and Clare are both happy with who they end up with – or don’t end up with. The last few seasons of the show haven’t really ended in victories as there have been so many breakups between the different Bachelor and Bachelorette seasons.

It would be so great if both girls could come out with a fiance they are really happy with this time around. After all, they both deserve it.

Are you excited for Tayshia Adams’ and Clare’s new season of The Bachelorette? Let us know in the comments below. Come back to TV Shows Ace for more news on all of your favorite Bachelor Nation stars. And, be sure to watch the new season when it comes on in October.