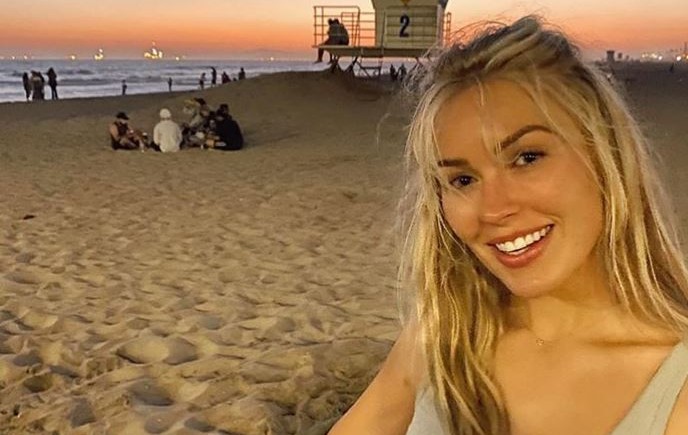 There are new details emerging about Cassie Randolph allegedly filing a restraining order against Colton Underwood. Court docs have been obtained by news outlets indicating Cassie filed the request. There is no word if the request has been signed by a judge. New information is surfacing that if factual, does not sound good.

TMZ first broke the news of Cassie’s request. Now, they have obtained further documents state reasons why Cassie is seeking the order against her ex, Colton. The documents claim Colton has been stalking her. It also says he has allegedly been sending “unsettling text messages.” And, if that isn’t enough, the allegations also say Colton planted a tracking device on Cassie’s car. The device was reportedly taped to the bottom of her back bumper so he could track her whereabouts.

TMZ also reports that Colton has been showing up uninvited to her Los Angeles apartment. And, if that isn’t bad enough, she claims he has also been showing up at her parents house in Huntington Beach. The reports says Colton takes “obsessive walks” to her apartment complex. She also says he loitered in the alley outside her bedroom window at her parent’s Huntington Beach house at two in the morning.

The report from TMZ also says Colton accused Cassie of hanging out with her ex-boyfriend. And, sent messages to her anonymously and to himself insinuating they were both being stalked. Cassie alleges that Colton later admitted to the text messages and planting the tracking device.

The case type is listed as domestic violence prevention without minor children. And, the court date for the request is set for Tuesday, Oct. 6 at 10:30 a.m.

These last few weeks have been challenging because, by now, you all know I’m an open book and I enjoy sharing my life with y’all. When our relationship ended we agreed to handle things as privately as possible as we attempted to navigate our new relationship as friends. I chose to do that since we were living in this interim period, but obviously a lot changed this week. Every experience provides us with an opportunity for growth. If you’ve been kind enough to have followed our story you’ve been with us through all of the ups and downs which have taught me so many lessons. I’ve come to realize when you’re in the thick of it you just need to take a step back and look at things from a different perspective, in doing so I have gained so much clarity about what I want and more importantly what I need in a relationship. I’m so excited for this next chapter of my life with new stories and new people. I can’t thank y’all enough for your understanding and your support during this time. Your messages mean a lot!

Colton admitted to having depression and anxiety

Recently, Colton went on Reality Steve’s podcast and spilled a lot of tea about The Bachelor franchise. One thing he admitted was being depressed and having anxiety during filming. He also admitted he is ready to distance himself from the franchise.

The couple announced their split in May and seemed to be on good terms. That remained the case until she appeared on The Bachelor: The Greatest Seasons — Ever! Colton didn’t like her talking about their split on television. He went to Instagram and said, “When our relationship ended we agreed to handle things as privately as possible as we attempted to navigate our new relationship as friends. I chose to do that since we were living in this interim period, but obviously a lot changed this week.”

Cassie responded and since then things have not been good between them. Among other things she said, “It seems you are subtly engaging in a tactic that peppers in aggressive comments such as ‘that obviously changed this week’ in order to make me look like the bad one.” Cassie went on to say, “I would also like to ask that you don’t cloud our great, 1 1/2 year relationship with a messy breakup.”

Neither have commented on the restraining order request. Stay tuned for more details.