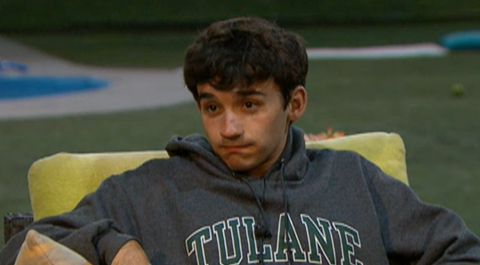 Those stalking the Big Brother live feeds today got a bit of an update regarding the situation with HGs bullying Ian Terry. For those who don’t have access to the live feed, the update was posted on Twitter earlier this afternoon. Fortunately, it sounds like CBS and the production team have heard the cry from fans for them to become involved in the issue. Because a conversation between Nicole and Dani suggests the production team is now involved.

Here’s What We Know

Big Brother fans know that Memphis (on two separate occasions) was in a room with three other HGs. Memphis did most of the talking while mocking and poking fun at Ian Terry because his autism makes Memphis uncomfortable. While the other HGs (on both occasions) in the room did very little talking… They did agree with Memphis. And, they were happy to laugh at all his jokes.

Now, Big Brother fans have been all over CBS on social media. They have been begging the production team to step in and do something about the bullying. And, it seems like we finally have a small update on the situation. Here’s what we’ve been able to find out.

A conversation between Dani and Nicole has finally gave fans the Ian Terry bullying update they were waiting for. The conversations confirms the production team has become involved in the current controversy in the house. And, it doesn’t sound like Nicole and Dani are too happy about it. The duo did confirm that Ian has also been pulled into the diary room to discuss it. See the screenshots below with the quoted conversation. Based on the conversation above, it is unclear if Memphis, Cody, and Christmas also had DR sessions about the bullying. But, we are assuming the production team pulled everyone involved into the DR at some point in time.

But, Big Brother fans learned something else.

It appears as if the mocking will be featured in an episode.

Now, as we previously reported, some fans wanted the controversial conversation aired on television. There are some pretty mixed feelings about it. Some don’t want to see it. But, many feel the only way for production and CBS to address it is to include it in an episode. And, it certainly sounds like it will be featured in an upcoming episode.

Moreover, it doesn’t sound like Nicole or Dani are too happy about it. In fact, Nicole seemed a little afraid of being on television while being mean to someone. Kind of puts a damper on the sweet personality a lot of fans assumed she had up until now. And, it also looks like Ian Terry will be around a little longer.

Apparently, Dani and her friends had plans to backdoor Ian Terry this week. Live feed viewers also mentioned Dani mentioning there was no way she’d be able to put Ian Terry on the block now. So, it certainly sounds like the production team has addressed the issue in the house!

Now, Dani did NOT seem to interested in discussing the conversation any further in front of the cameras. So, what do you think about the latest update involving the Ian Terry bullying situation? Do you think the production team plans to feature it in an episode? Share your thoughts with us in the comments.