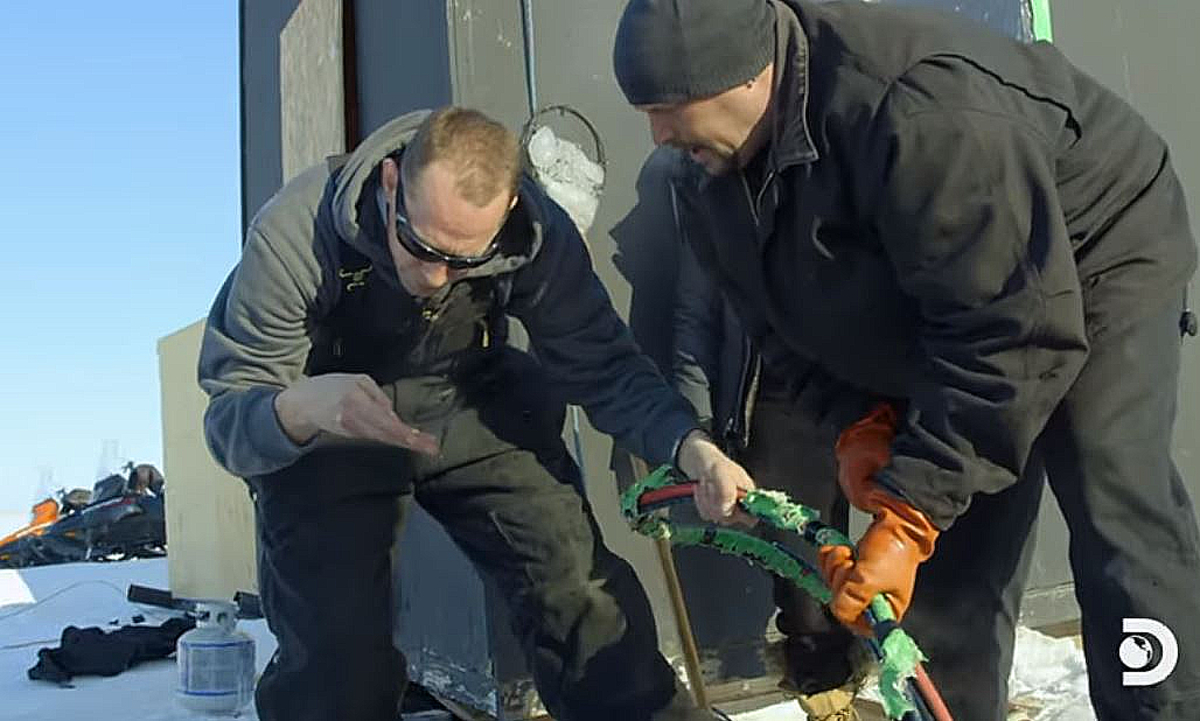 Tonight’s Bering Sea Gold on Discovery really brings home the tag line said by Eroica captain, Emily Riedel: “This is what happens when you don’t respect the Bering Sea!”

The Kelly clan are working together to make sure patriarch Brad Kelly is not in danger, but his radio communication with sons Kris and Andy reveal he is in a bit of distress.

It appears Reaper crew’s Brad Kelly does not respect the Sea and removes his glove underwater.

The TV Shows Ace exclusive clip reveals this to be true as a huge gold nugget is found underwater, but it comes with a potential human cost for the Reaper Crew.

In the clip we open with Kris who is monitoring his dad underwater.

Now the tension rises as Brad’s breathing is labored and Andy is summoned.  Kris yells at Brad: “Calm down you’re breathing hard okay!”

Andy is now on point to pull up his dad at Kris’s command.  Surfacing quickly and without a glove on which is insane in that cold of water, Kris yells at his dad Brad: “Why did you take your glove off?”

Kris explains the entire fast-paced scenario in a separate interview.  He says: “So check out my dad, he lays around all week long doing nothing [and] goes down underneath the water… scares me into thinking he’s drowning before handing me a huge ass nugget.  This is exactly what we need right now, my family is starting to make an effort!”

Freezing and with an exposed hand, but beaming with happiness, Brad says: “My hands froze but did you see that?”

Meanwhile, we see Andy is trying to take a bite out of the huge gold nugget.

Kelly is a colorful firebrand on the series. He is charming but also contentious at times, warring with his sons at times, as he brought his sons to Nome to get rich quick but several years in the three Kellys are still scraping in the Bering Sea. Loyal, Kris and Andy haven’t abandoned Brad in the quest to “reap” the gold out there.

In previous seasons, Brad has had issues with ex-wife Wendy, after Kris brought her to Nome in hopes of reconciling their family. It went south.

Now Brad is allowing Kris to take the captain’s chair on The Reaper. Andy serves as deckhand and crew mate while Brad dives looking for the gold.

Either Kris will lead them to gold or Kris will fail and fall back in line behind Brad’s leadership. Either way, it’s a win for Brad.

The clock is ticking as Shawn Pomrenke races to prove the viability of the TOMCOD.

And our Reaper Crew is busy as Kris makes amends with his crew and Brad dives for the first time in five years, saving the day with a surprise.

And back on Claim 14, Emily Riedel and the Eroica crew try to break the season curse.

Tune in tonight to see how much gold the Kellys score:

Derek Hough Reflects On His Long History With ‘Dancing With The Stars’
Is This A Sign ‘Bringing Up Bates’ Will Be Canceled?
‘Witcher’ Pendant-Wearing Olympian Superfan Wins Gold Medal
New Picture Of Fern & Ivy Seewald Surfaces On Reddit…Kind Of
Wait, Was Anna Duggar Just Spotted For First Time After Josh’s Arrest?