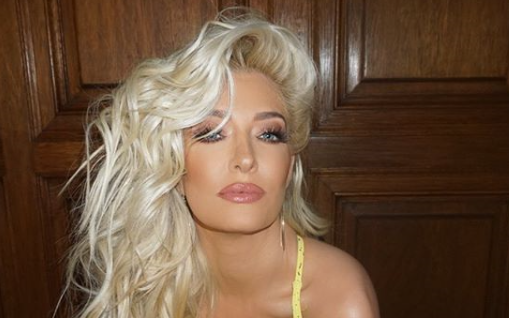 Erika Jayne had a very blunt message to give about Denise Richards leaving Real Housewives of Beverly Hills. She posted a gif with the cast of eighties show, “Small Wonder” In it the son slams the door on the little girl. He pushes her out of the house. Erika just captioned it, “bye.” Unlike Garcelle Beauvais who simply reacted saying, “plot twist,” Erika isn’t on Richards’ side at all.

Denise Richards recently announced Season 2 was her last. Brandi Glanville accused her of having an affair with her. The other housewives fought with her saying she mom-shamed them. Being on the show took a toll on her which was obvious from the conversations she had with the other girls. Beauvais proved to be her only ally on the cast after even Lisa Rinna doubted her.

What Did Fans Say About Erika Jayne Throwing Shade?

Fans who are loyal to Denise came after Erika Jayne. One said, “Harper’s Bazarr, I’m covering the icon issue. I got issues W, Vogue, Cosmo.” They accompanied the comment with pictures of all of Denise’s magazine covers. Another said, “Ugh. I wish it was you leaving. You peaked in your first season. You bring nothing but glam and looks, but glam is no substitute for a personality or sense of humor.” Another follower asked, “What has Denise done to you specifically that warranted this post? I’m still trying wrap my head around what exactly you are so mad about in all sincerity.”

While Erika didn’t tag anyone or add any hashtags, she did post the tweet right before the reunion aired. There were some that came to Erika’s defense for her thoughts. One said, “to all y’all trash talking Erika saying she’s next… she’s a major fan favorite and doesn’t need to buy her additional seasons. She’s a forever HW unless she choses to leave on her own.” Another fan said, “she was not honest she doesn’t belong on a show were honesty is everything, can’t wait tell next season.”

My thoughts on tonight’s reunion.. 🥴🤣

Erika Posted About The Reunion, Sort Of

Erika Jayne posted a picture of herself with a blank look on her face. It is captioned, “my thoughts on tonight’s reunion.” One fan was disappointed in the way she’s acted lately. They said, “You have always been my favorite, the reason I watched, so tonight was a huge disappointment. Sutton, Garcelle are now the only legit members. Shame you were my favorite.”

According to Hollywood Life, Erika probably doesn’t care what her followers think. She said in an episode last month, “if being a mean girl is standing up, saying how you fil and not backing down. I’m a mean girl till the day I die.” The third part of the reunion will air next Wednesday.