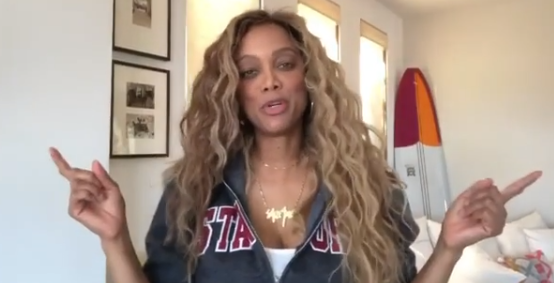 Since the Dancing With The Stars exec team announced Tyra Banks will take over as host, fans have had many opinions. Some fans say they won’t watch this season after execs replaced Tom Bergeron. Others believe that Tyra only got the job because of her race.

It’s true that Tyra Banks will be the first Black woman to host the show, but she wants everyone to know she got the job on her own merits.

“I never would have thought of it, nope! It actually hurts my feelings a bit that people think that I was hired because I’m a Black woman. [The show] reached out to me many, many months ago before any of the [racial] unrest happened. And it was something that I had to think about for a while because I knew that there’s a lot of responsibility coming in to an institution,” she said. “Tom Bergeron is a genius host, a comedic host. I had to make sure that I could bring something new, [while] respecting what he’s already done. And that could I really bring my audience to the show.

Tyra goes on to say that she hopes she can prove all the haters wrong this year. And she plans to do that by bringing her own personal flair to the stage.

“I’m just going to be myself in terms of personality. What will be the most fake is me walking out on that dance floor with the wackiest, craziest outfits with amazing hair and makeup. That’s not me—that’s a whole creation. But what’s coming out of my mouth and personality is going to be who you’re talking to now,” she said.

Others Seem Willing To Give Her A Chance

On social media, Dancing With The Stars pros seemed to warm up to Tyra Banks right away. However, some fans still aren’t convinced. Even though she has a lot to bring to the table, she can’t please everyone.

Dancing With The Stars returns for Season 29 on Monday night. Will you be watching? Even fans miss Tom Bergeron and Erin Andrews, it would be nice for them to give Tyra Banks a chance. Who knows? Perhaps they will really like the way she hosts.

Let us know what you think in the comments. Follow us on Twitter and Facebook for more updates. Check in with us regularly for more Dancing With The Stars news. We’ll have more information shortly.

‘Love Island USA’: Aimee Grinds On Wes After Elimination (Video)
Javi Marroquin Calls Cops On Lauren Comeau For Abuse, Guess Who Has His Back On This?
Chelsea Houska Catches Heat For Editing Photos Of Her Children
‘LPBW’ Molly Roloff Makes Rare Instagram Appearance: See Photo
Todd Chrisley Reaching Out To His Hurt Child, Which One?