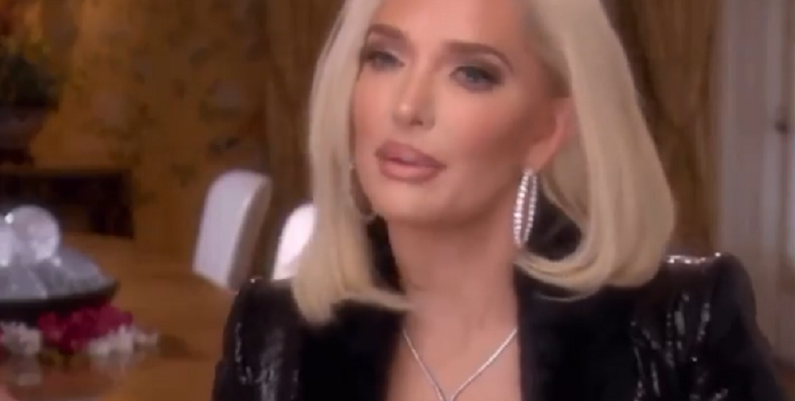 There’s been mixed reaction to Erika Jayne. The Real Housewives of Beverly Hills co-star used to a fan-favorite. But some think she’s too boring. Even her big break on Broadway as Roxie Hart in Chicago was not enough to keep fans interested.

Of course, there was there whole Denise Richards / Brandi Glanville drama. Erika received criticism for the way she handled it. Viewers slammed her as one of the “mean girls.” Now, she’s getting backlash for using too much Facetune in her photos.

Facetune is an app that changes the appearance of your face. It’s notorious among influencers, celebrities, and reality stars. But fans wish that Erika would stop playing around with her face. They can’t recognize her anymore.

Erika Jayne shares a funny face from the RHOBH reunion

On Wednesday, September 9, hours before part two of The Real Housewives of Beverly Hills reunion, Erika Jayne posted this goofy photo of her face. In the photo, she was waiting for filming to begin. She looks up to the ceiling with an uninterested look on her face.

“My thoughts on tonight’s reunion…” Erika Jayne wrote with a series of laughing emojis.

RHOBH fans accused Erika of using too much Facetune on her selfie. They took to the comments section to claim, “New face. Who dis?” Others suggested that she should stop using filters altogether.

“I personally think filters need to go away,” one follower wrote.

“You are unrecognizable. Disappointing considering you’ve always been known for keeping it real,” a second fan added.

My thoughts on tonight’s reunion.. 🥴🤣

But that’s not all. Some fans were really concerned with Erika’s selfie. They know that she likes to keep it real on the show. So, they wanted to know why she would tweak her beautiful face. Meanwhile, others claimed they were scared of her photo.

Fans clearly didn’t like this photo of Erika’s. But they didn’t mind when she was the face of Rihanna’s Savage X Fenty line. This little bit of backlash hasn’t stopped Erika from sharing another selfie on Instagram. She loves to share her looks, no matter what the haters think.

Erika Jayne with a new photo on Thursday, September 10. In the photo, the Pretty Mess author wore a silk blouse and a long blonde ponytail. Erika also wore a full face of makeup and gold jewelry.

“Pre-K,” she jokingly captioned the post. Still, fans didn’t like the photo. Most of them claimed that she looked too different because of the filters she used. Others accused her of going under the knife to alter her looks. Some fans even threw Erika’s glam squad under the bus.

Erika remains unbothered on social media. She very rarely responds to the backlash on Instagram. As for Twitter, that’s another story. She’s responded to haters who criticized her behavior on RHOBH.