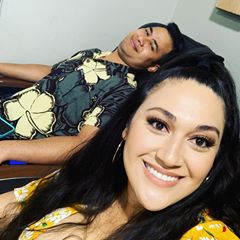 90 Day Fiance: Happily Ever After? Fans are going to love what’s about to happen! Kalani’s dad Low Faagata and Asuelu’s family are about to faceoff after a blowout between Kalani and Asuelu’s greedy mother and sister!

The Excitement on 90 Day Fiance

TLC has released a sneak peek clip of the upcoming confrontation between Low, Kalani’s dad and Asuelu’s family. Low is very unhappy about recent events that took place in Washington, and he doesn’t seem to be holding back!

In the latest 90 Day Fiance sneak peek video, Low walks in a room, while Asuelu is painting a wall. He looks a bit startled to see Low, his father-in-law shows up. Low seems to want to know what happened in Washington from Asuelu’s perspective. “I heard from Lani some things about Washington that I do not like, she said that you just turned into something that she’s never seen before,” Low stated.

Side Note from Low

TLC interrupted this tense conversation to add a clip with Low talking to the film crew. Low explains, “Us people from the islands, when we get angry, we get angry. I had that anger when I was his age. I think Asuelu is afraid my temper is gonna come out, but I have to show him that you can control your temper.” It seems clear that Low is able to control his temper and keeps on with the conversation. This is all on this week’s 90 Day Fiance: Happily Ever After.

“Kalani told me about how your family had to say a few things about the money sending that didn’t make sense to me,” Low continued. Asuelu tells Low that he did stand up for Kalani. He states that he told his mom that if they had money, they would send it and if they didn’t, then sorry but we won’t send money. Low continued to help Asuelu understand that things on the island are much different. Everything in the United States is more expensive.

The meeting is coming!

Low keeps talking of a meeting, and states, “My family never liked my wife but I always took up for her.” He continues by telling Asuelu that he is concerned that during the meeting Asuelu will not take up for his daughter and his two boys.

The sneak peek ends with Low confidently saying that if Asuelu doesn’t do what he is expected to, by standing up for Kalani and his kids then Low will step in and say what needs to be said. How exciting is that? This meeting will be happening soon so make sure to tune in every Sunday on TLC to 90 Day Fiance.