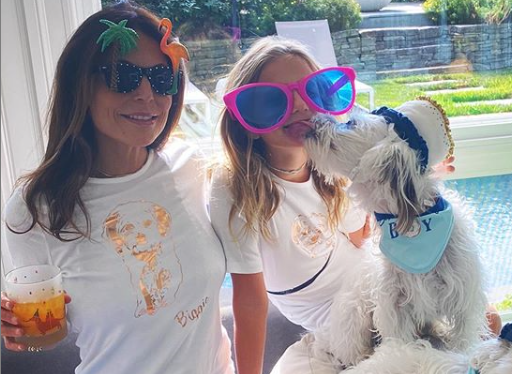 Bethenny Frankel is still happy to give her opinion on her former franchise. As for RHOBH she was recently asked what her thoughts were on the Denise drama. Recently Denise revealed she would not return for the next season. It’s no secret the, “Wild Things,” actress struggled the past year while being filmed on the show.

Whether this was because she desires more privacy or wants to focus on her acting career is unclear. Others think she didn’t want to deal with Brandi Glanville’s accusations. Queens of Bravo posted a screenshot of Bethenny being questioned and her response. Frankel didn’t hold anything back.

What Did Bethenny Frankel Say About The Richards Drama?

She said she liked Denise and thought she should live her life. Then went on to say, “BUT she is on a reality show where someone is always winning and someone’s losing.” Frankel then quoted, the prophet, Caroline Manzo and tagged her. “If you hang out with trash you start to smell like garbage.”

It seemed like harsh words coming from someone who had been in the mix before. One fan responded to her saying, “she just quit the show. It came out a few minutes ago.” Bethenny said maybe she was the profit. Fans responded to her Twitter post and they had questions.

What Questions Did Fans Ask In Response?

Bethenny Frankel responded to her fans who asked questions about what she meant. In a now deleted tweet someone asked if she was calling Kyle Richards trash. Bethenny responded, “I most certainly didn’t. It’s the milieu.” “Did you just call Brandi Glanville trash,” another fan asked.

Bethenny responded to them as well saying, “I am not; I don’t know her. I met her once & she was fun & sweet.” She said, “I literally haven’t seen this show this year. Like you I have been in pandemic land raising my daughter.” She went on to say she was happy Denise will find privacy again. Fans responded to the Queens of Bravo post as well. One pointed out that she was best friends with Kyle and it felt a bit shady. Another said, “one queen quoting another.”

Bethenny isn’t one to mince words on social media. She recently tweeted, “if you enjoy when people only post themselves doing fabulous things & eating bright pretty salads while looking phenomenal, effortless & like a million bucks then DO NOT LOOK at my insta story.” One fan responded listing everything in her story. They said, “I like your insta story that goes from you having a great time on a boat with cocktails and then the next when you are still in bed the morning after.” No doubt fans will continue to follow for her opinions on the drama and the other housewives. Especially if she keeps shooting it straight.

‘Below Deck’ Kate Chastain & Ben Robinson Get Cozy On The Couch
Ashley Iaconetti Of ‘BIP’ Shared What Scared Her Early In Pregnancy
‘Welcome To Plathville Season 3’ Will The Family Make Amends?
Love In The Afternoon With Hallmark’s ‘A Little Daytime Drama’
Danielle Sends Adam To Clean Busby Bus, Won’t Travel In Dirty Vehicle