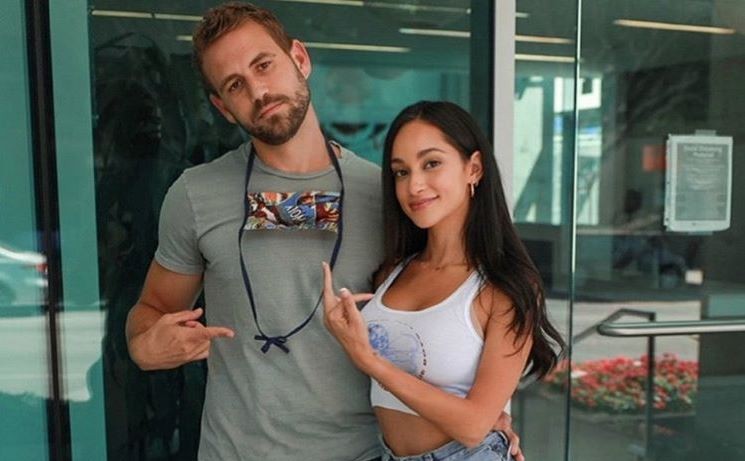 Fans have been wondering where things stand with Victoria Fuller and former Bachelor Chris Soules. She announced in July the two were happy and getting to know each other. Victoria gushed about how amazing he is, but then there were crickets. So, what is going on with these two? She spilled the tea on Nick Viall’s podcast, The Viall Files.

Where do things stand with Victoria and Chris

Victoria sat down with former Bachelor Nick Viall last week to dish on her relationship and a whole bunch of other tea was spilled as well. Well, many fans may be disappointed to know that Victoria and Chris have decided to go different directions. She said she wants to focus on herself for a bit. However, this doesn’t mean they are necessarily done for good. This is where things get a bit complicated. While they aren’t necessarily calling themselves a couple, Victoria said she thinks he is amazing. She has so much respect for Chris.

Victoria said she and Chris still talk everyday. And, when Nick said Chris wasn’t her person, Victoria was quick to say we don’t know that yet. She just said she’s not ready to make a life in Iowa. And, while she’s not ready to move to the farm just yet, it’s obvious she has feelings for Chris.

How did they really meet?

Victoria spilled the beans on how she met Chris. Everyone pretty much knows that Kelsey Weier set them up. She had told Victoria there was only three Iowa contestants on The Bachelor. She said she had his number and Victoria said he’s pretty cute. So, Kelsey reached out to Chris and sent him Victoria’s phone number. He texted her within five minutes. She was flattered and thought it was very sweet.

They texted and then face-timed each other. Three weeks later she made her first trip to Iowa. While she admits she is no farmer, she says she did learn a lot about corn. This led to a hilarious conversation between Nick and Victoria.

Nick asked her how she eats her corn. She then proceeded to tell Nick how Chris uses I Can’t Believe It’s Not Butter on his corn. And, he doesn’t even refrigerate it. Nick did not like this at all. He felt that Chris should at least be using real butter. This part of the podcast was very funny and entertaining.

So, while Chris and Victoria are not an actual couple at the moment, she thinks they are a lot alike. Perhaps these two will make a life together in the future. She even said maybe in a few years she may be ready to move to Iowa, but right now she is taking time to focus on herself.

What do you think about Chris and Victoria as a couple?