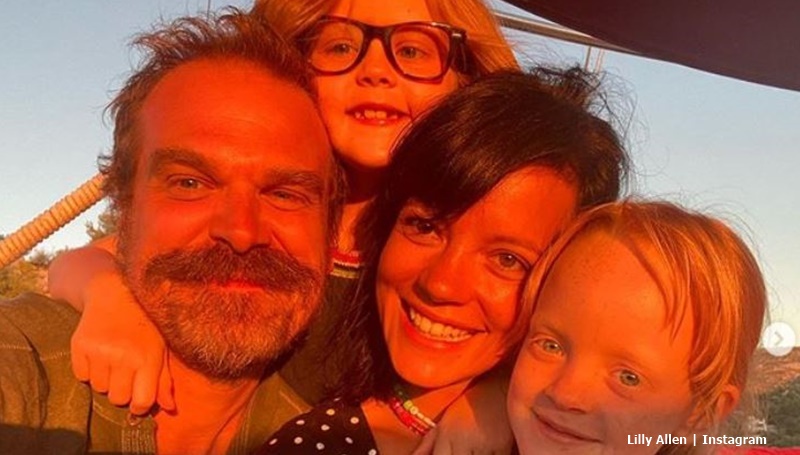 Stranger Things fans are no strangers to David Harbour. Of course, they saw him in his role as the Sheriff in the Netflix series since the first episode. They thought he died in Season 3, but the good news comes that he reappears in Season 4. However, one thing fans are not familiar with, is the star getting married. Linked to several people in the past, he never actually married anyone. But now, he and Lily Allen got a marriage license in Las Vegas.

Fans knew things heated up between Lily and David. Back in August, she shared a photo herself with David and her kids. They just ended a fabulous vacation together. She captioned her post with, “Bye bye Croatia. We had the best time, will definitely be back. Special shout outs to our amazing crew on our amazingly beautiful vessel Nostra Vita and @goolets for sorting everything out for us so last minute. Trip of a lifetime for sure. 😘.”

Stranger Things fans adored the photo. One said, “Omg this is sooooooo cute💕💕💕💕💕💕💕💕.” US Weekly reminds readers that “[David] and the “Not Fair” singer went public with their romance in September 2019.” Lily was previously married to Sam Cooper and they had two kids, Ethel and Marnie. The split left her single, and so things got serious with her and David. So serious that they got their marriage license this week.

Bye bye Croatia. We had the best time, will definitely be back. Special shout outs to our amazing crew on our amazingly beautiful vessel Nostra Vita and @goolets for sorting everything out for us so last minute. Trip of a lifetime for sure. 😘

One year to get married

Reportedly, David and Lily got their license on September 6  in Las Vegas. But, the time period for actually marrying lasts a year, So, it’s not clear if they took their vows yet. For David, it’s the first time a relationship went this far. Recall, he previously dated Julia Stiles and Maria Thayer. Then, he got together with Alison Sudol. But, they split after about 15 months together.

It seems that David really enjoys Lily’s kids. He shared a photo back in August that got fans talking about “dad life.” Stranger Things fans got excited as he didn’t post on Instagram for a while. Some fans seemed a bit confused about who the kid was in the photo. But of course, it’s Marnie, Lily’s daughter. Always good with the kids on the show, fans think he’d make a great father. Or, in this case, a step-dad.

Of course, any post by the cast of the Netflix show sees people saying they can’t wait for the next season. Apparently, production starts again in September, And there might be an early 2021 release date. David Harbour shared a short teaser that reveals his return to the show.