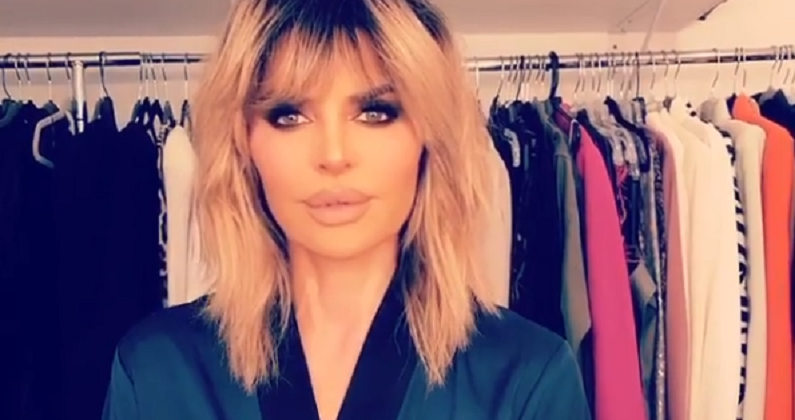 The trolls are in full force. Lisa Rinna has been judged for the way she handled her friendship with Denise Richards during Season 10. Fans also didn’t like her behavior during part one of the three-part RHOBH reunion. Meanwhile, others are questioning her erratic behavior during the reunion.

Some call it karma. In the past, Rinna accused Denise of drinking during her at-home confessionals. Some fans joined the bandwagon and claimed that the Wild Things actress was “high” during the reunion. Rinna is the latest co-star to get accused of abusing drugs.

Here’s what the hater had to say.

On Tuesday, September 8, Lisa Rinna shared this behind-the-scenes clip from the virtual reunion. In the video, the former soap star wore a gold sequin dress. Rinna made funny faces at the camera she waited for the reunion to start. In the background, host Andy Cohen can be heard saying, “Alright ladies, are you ready?”

In the caption, Rinna made it clear that she was “ready.” She promoted part two of the RHOBH Season 10 reunion on Wednesday night. Rinna noted that “Joan is back,” referring to her alter-ego. While Rinna got compliments, she also got plenty of hate. One follower accused her of abusing Xanax.

“This is what happens when all you eat is Xanax,” the follower wrote.

“Takes one to know one,” Rinna shot back.

The troll responded, “well at least you’re owning it. Maybe rehab will have a two for special, you can take Harry with you.”

The reaction in the comments section was mixed. Most of Lisa Rinna’s fans called the troll “mean,” while others had a good laugh. Others didn’t like Rinna’s response to the Instagram user.

Meanwhile, another follower said that Rinna looked more like a “desperate housewife” rather than a real housewife. Rinna found the comment amusing. Another troll called Rinna a “druggie and trouble maker.” This comes after one troll claimed that Rinna should get fired from RHOBH.

Lisa Rinna responds to haters who call for her firing

The RHOBH co-star previously went on the defense this week. On a recent episode of the reunion, Lisa Rinna accused Denise of “gaslighting” their fellow co-stars. She even created a song from the word she discovered.

RHOBH fans stormed Rinna’s Instagram to share their thoughts. Many of them called for her firing. One person wrote, “FIRE Lisa, please!”

“Do [you] feel good saying that Karen?” Rinna responded. “Gosh I’d never want someone to lose their job and livelihood. What makes you like that Karen?”

Rinnah has used the nickname before. QVC viewers called for her firing after she shared her political views on Instagram. Rinna blasted them and said she will never keep quiet. The shopping channel never fired Rinna since she debuted some of her new fall fashions last month.

However, RHOBH fans would like to see Rinna go. But she’s not backing down anytime soon.

Part two of The Real Housewives of Beverly Hills reunion airs Wednesday, September 9 at 9 p.m. ET on Bravo. So, make sure you set your DVR!

‘The Young and the Restless’ Spoilers, August 2-6: Phyllis Gets Everything She Needs
‘DWTS’ Pro Gleb Savchenko Has Some Exciting News — What Is It?
Netflix Anime: ‘Monster Hunter: Legends of the Guild’ Release Date, Trailer
‘DWTS’ Pro Emma Slater Discusses Tyra Banks’ On-Stage Performance
OH NO!!! Jessa & Ben Seewald Are Hurting For Money After Giving Birth?!