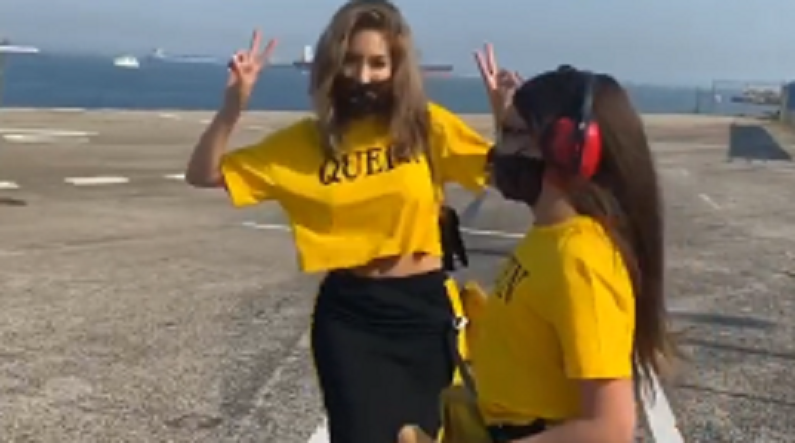 Teen Mom alum Farrah Abraham and her daughter Sophia Abraham had a fun-filled day on Labor Day. The two shared their adventures on social media. But fans lashed out at Farrah when she took her 11-year-old daughter on a helicopter ride. Most of them slammed the reality star’s parenting skills.

It happened on Monday, September 7. Farrah posted a video of her and Sophia taking a helicopter ride. The proud mom thought it was the perfect way to celebrate the holiday weekend. The mother-and-daughter duo even wore matching yellow and black outfits with the phrase, “QUEEN.” Farrah gave the peace sign before they boarded the flight.

Farrah Abraham calls herself the #BestMomEver

The former MTV star posted the video on her Instagram page. In the video, she paired her yellow tee with a curve-hugging pencil skirt. Meanwhile, Sophia wore hers with a black and yellow pencil skirt. They also wore black face masks. In the caption, Farrah Abraham called herself the #BestMomEver.

The two boarded the chopper. However, it’s unclear where Farrah was taking her daughter. It’s likely that they were only taking a tour of the city. Farrah was excited to see her daughter’s expression. Their outing seemed innocent compared to Farrah’s other times with Sophia. One even commended the reality star for focusing on her daughter.

“A lot of her parenting is questionable but I can respect she always takes her daughter with her, never palms her off, hasn’t had any more children, hadn’t had multiple men around her daughter, etc.,” one fan wrote. “Like it’s always just been Farrah and Sophia, and that’s one thing she’s done right.”

Farrah slammed for being a helicopter mom

Of course, Farrah Abraham got plenty of hate for the video she posted. Some followers questioned whether their mother-daughter relationship was “damaging.” Others think taking Sophia out on a helicopter ride is dangerous. And there are some fans who think Farrah is a helicopter mom.

They noticed the symbolism in Farrah’s post. Some of Farrah’s haters feel that she should give Sophia some room to breathe. They would like to see Farrah’s daughter have friends her own age. Some fans think it’s unhealthy that neither Farrah nor Sophia have any friends of their own.

Farrah Abraham hasn’t responded to the backlash. But there are oftentimes when she doesn’t respond. However, that hasn’t stopped her from defending herself over the years. She doesn’t let the negativity get to her.

She doesn’t care what her haters think of her relationship with Sophia. The two are constantly together, and it’s not going to die down anytime soon. Along with traveling, they also participate in brand sponsorships together.

Farrah and Sophia just launched their joint podcast, Abraham Girls. It calls itself a “docu-reality podcast following OG Teen Mom Alum Farrah Abraham, a girl mom to Sophia Abraham.” Farrah and Sophia hope to take over the entertainment industry. She has high hopes for her aspiring daughter.