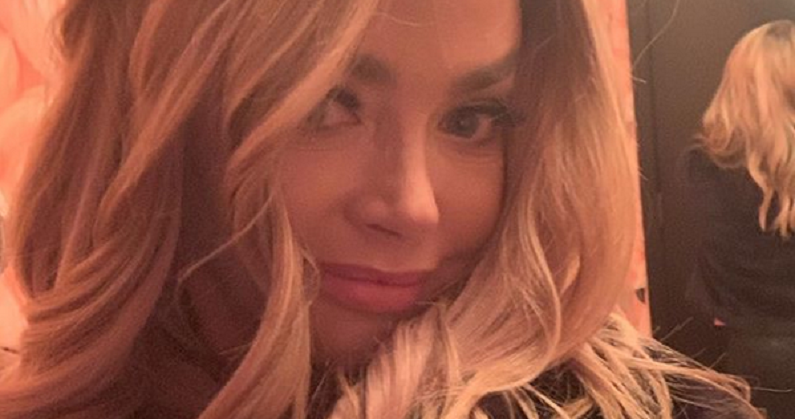 Denise Richards is back home to her husband Aaron Phypers. The couple is ready to celebrate their second anniversary. For most, it feels like it was just yesterday when their wedding aired on The Real Housewives of Beverly Hills. Denise flew back home to reunite with Aaron and her three daughters, Sami, Lola, and Eloise, after some time out of the country.

Fans know has been on the go lately. Her schedule is packed with new projects, including Glow and Darkness. They wondered why she looked anxious during the RHOBH Season 10 reunion episode. She explained that she was tired from all the traveling and working she’s been doing lately. So, Denise’s trip back home was a welcomed one.

On Tuesday, September 8, Denise Richards took to Instagram to post a new selfie. In the photo, she wore a blue face mask and denim overalls after her long flight back home. Denise’s ocean blue eyes were the center of attention in the photo, with most of her face covered up.

In the caption, the Bold and the Beautiful actress revealed that she misses her family. She added that it’s been two years since she married Aaron during an outdoor ceremony in Malibu, California. The wedding was filmed for The Real Housewives of Beverly Hills. Denise’s co-stars, including Dorit Kemsley and Sutton Stracke, wished her a happy anniversary.

Making my way back home. Miss my family so much. And today is hubby & I 2 year anniversary.. ❤️

The non-traditional ceremony featured the couple walking down the aisle to the Metallica song “Nothing Else Matters.” Since their wedding, their marriage has made headlines. On Season 10 of RHOBH, former Housewife Brandi Glanville claimed the couple had an “open” relationship. She also revealed she allegedly hooked up with Denise, to which Denise denied.

Kyle Richards doesn’t understand what Aaron does for a living

Denise Richards and Aaron Phypers became the center of attention during Season 10. Aaron found himself clashing with Denise’s co-stars, including Erika Jayne. During Episode 3 of the series, Kyle Richards held a dinner party. At one point, she tried to explain Aaron’s job to the ladies. Then she asked him to explain it to everyone.

Instead of providing a clear answer, Aaron relied on conspiracy theories.

“Everything you’ve been taught about how diseases process and stuff works is not true,” Aaron told the women. “I have to be careful.

Happy 2nd Anniversary my ❤️ …. so blessed & grateful to have you as my soul mate, twin flame, partner in crime, confidant, best friend, lover, best daddy to Eloise, & our menagerie of beautiful furry misfits, best step dad ever, most supportive of my career, I know my mom brought us together & I couldn’t imagine going through this beautiful journey with anyone other than you. I love you so much💕 @aaronwilliamcameron 📸: @michaelsimon64 glam: @carlitos_hair @joannaschlip dress: @mark_zunino

The scene left most of them confused about what he does for a living. On Sunday, September 6, during The Real Housewives of Beverly Hills Season 10 After Show, Kyle exclaimed she felt bad over how it played out.

“I do want to say this: I’ve never in 10 years, every put down anyone’s business, so I actually wanted him to explain what he does ’cause nobody understood it last year,” Kyle said. “Honestly, I felt bad ’cause I wanted him to explain ’cause I know he wants to be able to — and I’m all for alternative medicine and all that. I had no idea the door I was opening was going to leave everyone way more confused.”

Denise previously explained his job. She told Bravo that it had to do with “light and sound therapy.”