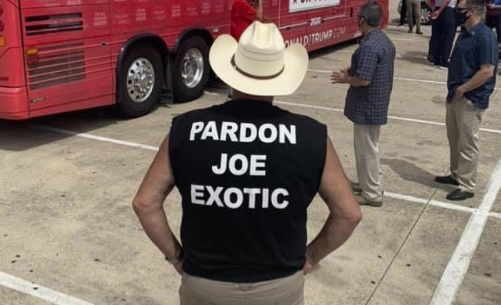 No one really wants to be in prison. But Tiger King star Joe Exotic is particularly unhappy these days. He’s serving a 22-year sentence for plotting to have Carole Baskin killed, but he’s hoping to get out soon. TMZ recently reported Joe Exotic wrote a rather lengthy case to President Donald Trump, hoping he will pardon him. He also wrote a letter to Donald Trump, Jr. to ask for his help as well.

“I have been sexually assaulted by jail staff, beat up and tied in a chair to the point the skin came off my arms,” Joe Exotic wrote in the letter to Donald Trump Jr. “Please be my hero…My hands are damaged from the abuse in jail so I’m sorry for the soppy (sic) writing and spelling. Allow me to make you proud, to make America proud, to make the world proud. Be my hero please.”

According to TMZ, Joe swears he never plotted to kill Carole Baskin. However, if you watched Tiger King this spring, you may have your own doubts about that. One of his attorneys asserts that the threats were “simply another aspect of his showmanship … Joe’s jokes, at most, in bad taste, were merely jokes.”

Joe Exotic’s legal team is on their way to Washington D.C. in an attempt to persuade the president to pardon him. Do you think they will have any luck? Let us know what you think in the comments.

Those who run Joe’s official Instagram page have been trying to get traction for the cause online.

Team Tiger will be heading back to DC on Wednesday to deliver my Pardon letter. I can’t say it enough how thankful I am to finally have a defense team who cares about my truth…..#freejoeexotic #helpfreejoe #pardonjoeexotic @donaldjtrumpjr @realdonaldtrump

Carole Baskin Is Having A Much Better Time

While Joe Exotic is in prison, his rival Carole Baskin is putting on her dancing shoes. She will join Dancing With The Stars for Season 29, which premieres September 14. However, many Tiger King fans believe Carole is guilty of a murder plot too.

Throughout Tiger King, Joe Exotic berated Baskin and accused her of murdering her husband, Don Lewis. Many are suspicious of her involvement, but so far she has not been charged. According to recent reports, Baskin’s handyman Kenny Farr may actually be involved.

A new episode of 48 Hours Suspicion scheduled to air September 9 will feature Trish Farr-Payne, the handyman’s ex-wife. She claims her ex-husband behaved incredibly suspiciously around the time of Don Lewis’s disappearance. She alleges he threatened to put her in the meat grinder “like [he] did Don.”

In any case, Joe Exotic is in prison, and Carole Baskin is free. It really seems like she came out on top.

What do you think of this news? Will President Trump pardon Joe Exotic? Did Carole Baskin kill her husband, or was it the handyman? We’re curious to know what you think. Make sure to follow TV Shows Ace on social media. We’re here to keep you informed!