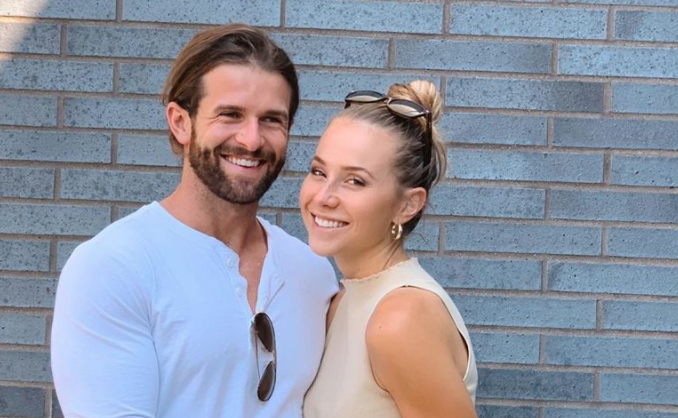 Jed Wyatt is definitely over Hannah Brown. After about a year of dating, it seems he is moving in with his girlfriend.

According to US Weekly, Jed Wyatt popped on Instagram to share a bit of news with his followers. He will be moving in with Ellen Decker. Ellen is his girlfriend of almost one year.

In the photo he shared, the pair look pretty happy together honestly. This may have been the right move for Jed.

“Excited to begin this new chapter with you in our own place and space,” he writes on the Instagram post. “May it be filled with spicy margaritas, sweaty workout clothes, and many, many memories. Now, let’s get some new furniture for Bo to chew on! ♥️ ♥️ .”

Ellen actually responded to the post echoing her excitement for the big change.

“Couldn’t be more excited, I love you 😘 ,” she said in the comments.

Excited to begin this new chapter with you in our own place and space. May it be filled with spicy margaritas, sweaty workout clothes, and many many memories. Now, let’s get some new furniture for Bo to chew on! ♥️♥️

When did Jed get a girlfriend?

Missed out on the part where Jed Wyatt got a new girlfriend post Bachelorette? The two went Instagram official just after Thanksgiving of last year. In the original post, he was sure to thank someone for: “introducing me to the only person to make me smile more than riding a jet ski.”

Since then they have been cozying it up.

They spent quarantine together which Jed says was a good test for their relationship, as it was many people’s. It sounds like it ended up pretty well though and the two didn’t get into too many fights.

“This has been a good test for our relationship since we are used to distance,” he explained when the pandemic hit. “It’s been so nice to wake up to her every day and has made me even more excited for our future.”

“She’s just so amazing, and I probably annoy her with how often I just want to smooch her face off. We definitely have come together more, and I’m thankful for that,” he continued.

It sounds like Jed and Ellen are pretty happy together. It’s good that he could get past his less than perfect engagement to former Bachelorette Hannah Brown.

Are you happy for Jed and his girlfriend? Let us know if you agree or if you think they are making a mistake. Sound off in the comments below! Come back to TV Shows Ace for more news on your favorite Bachelor Nation stars.

‘RHOC’: What To Know About Elizabeth Vargas’ Ex-Husband!
Why Is ‘The Young And The Restless’ Teasing Another Victoria, Billy, Lily Love Triangle?
Candace Cameron Bure Claps Back At Latest Social Media Criticism
‘Unexpected’ Ethan, Myrka and Baby Get Kicked Out Of His Family’s Home
Ken Burns, Henry Louis Gates Jr. More Read For My People by Natasha Trethewey for ‘PBS American Portrait’