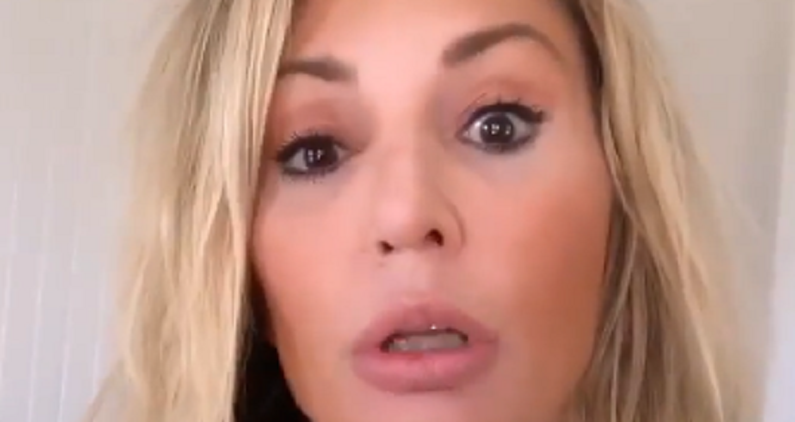 Below Deck alum Kate Chastain is always brutally honest. It’s one of the reasons why the fans love her. She didn’t hold back in a recent Instagram Live with her followers. During the chat, Kate named two of the “worst” celebrities in the Bravo universe.

Kate was not impressed with Vanderpump Rules alum Stassi Schroeder and RHONY’s Luann de Lesseps. She’s run into the reality stars on separate occasions. However, Kate’s feud with Stassi may not come as a surprise to her followers who closely follow her on social media. Back in June, she threw some subtle shade when Bravo announced that Stassi and her friend Kristen Doute were fired from the show.

The Below Deck alum talked about her problem with Stassi Schroeder. The VPR alum though Kate was having too much fun at an event. Stassi doesn’t like it when others have more fun than her, especially on her birthday. Kate said that the Next Level Basic author complained about Kate and her friend.

“I went to an event for the Watch What Crappens guys at some comedy club in West Hollywood like two years ago,” Kate explained. “And I was there with a good friend of mine, who actually had done a lot of standup over the last 10 years at that club.”

That comedy club meant a lot to Kate’s friend. She even threw a college graduation party there. Kate’s friend works in the industry, but behind-the-scenes, which Stassi wasn’t aware of. Since Kate’s friend wasn’t a celebrity, the fashion blogger treated them unkindly.

“And my friend and I were having a great time and she’s like, ‘Oh this is the server, he’s worked here for 40 years.'”

Kate mingled with the guests and was having a good time. Until someone tapped her on the shoulder with an important message from Stassi. “The girl goes, ‘Stassi just texted me and said your friend and you are being too loud.'”

Kate said the club was her friend’s “living room.” And she ranked higher than Stassi at the party. The former chief stew found the entire situation ironic. That’s when she realized that Stassi saw her as less than her.

On June 9, Bravo cut ties from Stassi Schroeder and Kristen Doute. Everyone had a say on that matter. But most of the Bravo celebrities kept their opinions to themselves. All except for the Below Deck OG herself.

Kate Chastain took to Twitter to post, “karma AF.” Fans already knew who she was talking about. “AF” is Stassi’s catchphrase. See the tweet for yourself below.

But they had no idea why they were feuding. Some of the fans wondered if something went down during Bravo Con back at November 2019. Others simply just loved Kate’s response. Nothing else came of it until now.

During her Instagram Live, Kate shared her thoughts on another Bravo peer. She talked about the time when she shared the camera with Real Housewives of New York star Luann de Lesseps. Kate had a frosty encounter with the Countess.

“I was on Watch What Happens Live with Luann and we were 60 seconds, 30 seconds until going live,” Kate said. “And Andy being the great host that he is said, ‘Oh Luann you just got the yacht! Kate works on yachts!’ And [Luann] goes to me, ‘Well, I guess you’re below deck and I’m above deck.'”

All of a sudden, the ladies had to go live. Then she revealed that Luann didn’t buy a yacht, she borrowed “a 130-foot yacht” from her friend for one night only. Talk about awkward.

But Kate had nothing but nice things to say about Dorinda Medley and Elyse Slaine. She was “shocked” by Dorinda’s exit from RHONY. Then Kate went on to call Elyse one of her favorite friends of the Housewives.