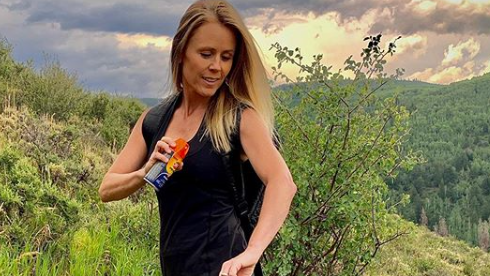 Trista Sutter of The Bachelorette shared a post on Instagram letting her fans know what quarantine had given her. Gray hair! She started the post, “New hair who dis? I’ll tell you who… a mom who worked out.” She said she is, “VERY thankful that our community is healthy enough for schools to educate her kids in person so that she can finally get back to the gym.”

She went on to say she needed to combat months of inactivity with an outdoor workout class. Sutter said her hair was losing more than normal because she was almost forty-eight and her hormones were out of whack. She stated hot flashes were driving her crazy.

Trista Sutter Worries About The State Of The Nation

Speaking in the third person, Trista Sutter went on to say she wanted to, “crawl in a hole and bring her babies, fur babies and first responder husband with her so she can protect them from the scary world. A world of viruses and riots and senseless deaths and division. A world where people are more concerned with being right than being kind.”

Fans responded to her post with gratitude to the star for keeping it real. One fan praised her saying, “Yesssssss!!!!!! Amen!! Finally some real ness in this “celeb community.” Another said she was still flawless. Moms everywhere can identify with not being able to get their hair done during quarantine. They also can relate to Trista being happy her kids are going back in person.

Trista Sutter and her winner have been together for two decades. When speaking to ET in July she said, “I think that, you know, marriage is hard work and we work constantly on trying to be better, and you have to.” She’s been staying busy during quarantine sharing a snap of her on a hike. In a picture with her family she said, “the mountains were calling, so we went…for one last hoorah.” She mentioned they traveled in the airstream to Ridgway and Ouray. The family has a second account where they share all their airstream travels. They wanted to go on one more adventure before the kids went back to school.

Trista shared a throwback picture of her and Ryan floating in the water following the very real one. “The one where they went to Fiji for their honeymoon (and she used to have abs).” Fans told her not to body shame herself, she has two beautiful children she brought into the world.

No doubt, the self-described, “travel-aholic,” is missing being able to travel. She hash-tagged the picture dreaming of travel. At least she can share throw-back travel pictures on Instagram to feel better.