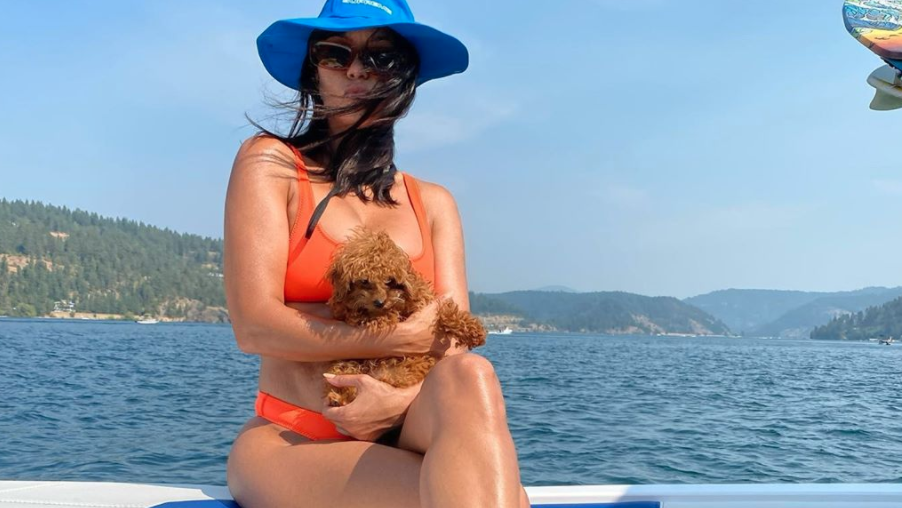 Kourtney Kardashian is welcoming a new family member into her life. She introduced the furry baby on Instagram.

Kourtney Kardashian gets a new puppy

Kourtney revealed that she got a new puppy in her family and she showed her off to her Instagram followers. In a photo, she’s wearing a bright orange swimsuit, posing on a boat holding a tiny golden puppy. On top of her head she has a bright blue hat. The caption of the photo says: “say hi to Ruby.”

Kourtney already has a dog named Honey. It isn’t clear yet how the two pups will get along, but photos of the two are bound to be pretty adorable.

In the comments of the post, Kourtney revealed that the puppy is a poodle.

Of course, someone else noted that the dog is very lucky. Especially because the first photo is out on a boat. Kourtney responded saying “her first boat ride.”

Sounds like this dog will be living in the lap of luxury! There are probably several more boat rides in that pup’s future.

What else is Kourtney doing?

Kourtney has a lot going on besides just getting a new dog. There have also been speculations that she and Scott Disick are back together. However, sources revealed that that’s not true.

He did break up with Sofia Richie and has been spending more time with Kourtney. However, that doesn’t mean they are romantically involved anymore.

Apparently, the two feel that they are in a good place right now and don’t need to push it any further. So, for now, they will just co-parent.

Sources say though that Scott is and always will be in love with Kourtney. After all, they do share three children, Mason, Penelop and Reign. They even go on family vacations together since the split from Sofia.

Scott constantly hanging out with Kourtney attributed to his separation from Sofia earlier this year. They tried again to make it work, however they ultimately came to the same end once more. Whoever Scott dates next will have to accept that his children will be a priority in his life. Other than his children being his priority sources say he is also just working to better himself right now.

Do you want Kourntye Kardashian and Scott to get back togehter? Let us know what you think in the comments. Come back to TV Shows Ace for more news on your favorite Kardashian family members.