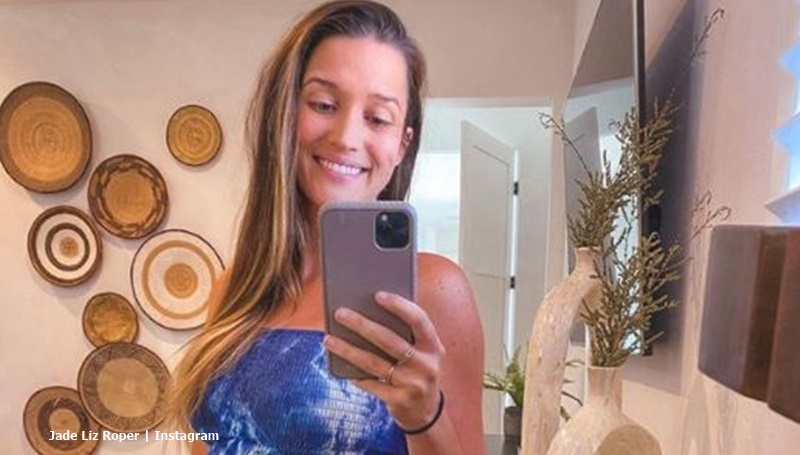 Jade Roper and Tanner Tolbert expect their third child soon. And now, it sounds like this baby might be the final one for the Bachelor in Paradise couple. Jade hinted that Tanner might consider getting snipped. The news came via her Instagram Stories in a Q&A session over the weekend.

After Jade and Tanner announced their unplanned pregnancy, the couple revealed the gender of the newcomer. We reported that they expect another boy. The couple already has Emmy and little brother Brooks. Bachelor fans may recall that Brooks arrived in such a hurry, Jade birthed him in their closet.

US Weekly reported that after the birth of Brooks, the couple considered more kids. At the time, Tanner said that Jade hoped for at least two more. And, fans liked the idea of a round number. After all, nobody likes being the “middle child.” But, it looks like the couple now may settle for three kids. The hint came when a fan asked about names for girls.

On her Instagram Stories, the ABC star answered a fan who asked about names for girls. She revealed they chose a “special” name for a second daughter. But, she might not get the chance to use it. She noted, “I’m pretty sure Tanner is going to get the snip-snip.” Well, a vasectomy sounds rather radical, but if necessary, doctors can usually reverse the process.

The Mayo Clinic explains that “almost all vasectomies can be reversed. However, this doesn’t guarantee success in conceiving a child.” Apparently, for each year that passes, the less likely it is that the “reversal” works. But of course, other options like sperm banks exist as well, if the Bachelor couple changes their minds.

On Monday, Jade shared a photo of her baby bump. She captioned it with, “You are me. And I am you. And everything else can wait. ✨ #29weeks #mamasaremagic.” Lindsie Chrisley commented, “Beautiful 😭.” And, Tanner told his wife, “Hey mama 😍.” Actually, Jade looks really into this pregnancy. Hopefully, she’s not taking it as badly as Brooks’. Back then, she struggled with fatigue and morning sickness.

You are me. And I am you. And everything else can wait. ✨ #29weeks #mamasaremagic

One fan said to Jade Roper, “Girl you just rock pregnancy. Looks so beautiful on you ✨💙.” Actually, the whole mothering thing seems to suit her. Although she often shares her uncertainties about the kids, clearly, she adores her children. She often posts photos of them and tells anecdotes about motherhood. Plenty of other moms can relate to her experiences.

No doubt, in time, she will let fans know if Tanner chooses to get the snip or not. Jade’s very open about discussing this sort of thing with all her followers.