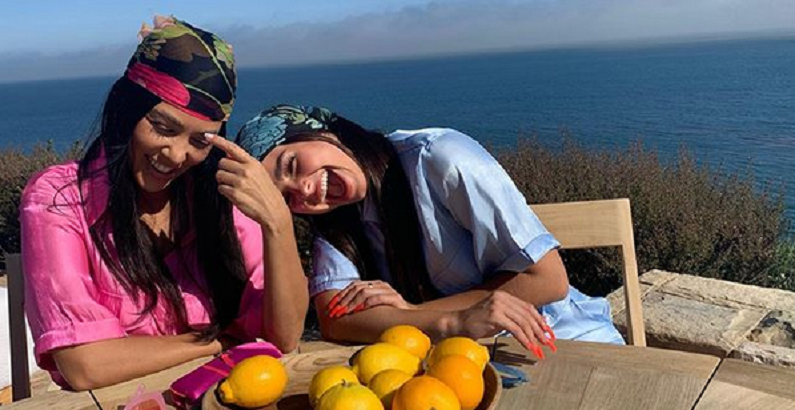 Kourtney Kardashian has a much younger best friend and fans find it strange. The 41-year-old Poosh founder and 19-year-old Addison Rae Easterling have become close lately. The two have been spending a lot of time together lately. Ever since they met, they’ve quarantined together.

Kourtney may no longer keep up with her Kardashian sisters anymore. That’s because she’s trying to keep up with the TikTok crowd. Addison Rae is one of the most popular influencers on the social media app. The two may not seem like they would have a lot in common, but it turns out they do.

Ever since Addison made a TikTok video with Kourtney’s 10-year-old son, Mason, the two have been inseparable.

Kourtney Kardashian and Addison Rae do everything together. They formed their own workout routine. They collaborate on TikTok videos together and even dine out together. The duo even takes part in bikini-clad photo shoots, which is making KUWTK fans uncomfortable.

One fan on Lipstick Alley asked if it’s weird for Kourtney to be best friends with a teenage girl. Most of the comments had a resounding “yes.” Fans don’t like that Kourtney has taken Addison under her wing. Others think it’s because of Kourtney’s stunted growth.

Fans want to know why the two are hanging out. Does Kourtney want to become the top influencer on TikTok? Or, does Addison want a prime spot on Keeping Up With the Kardashians? Others think Kourtney should focus on her kids instead.

picture me I picture you

In an exclusive interview with Entertainment Tonight, Addison Rae talked about her unlikely friendship with Kourtney Kardashian. She also addressed the rumors that she might appear on the reality show. But everyone knows that Kourtney no longer wants anything to do with KUWTK. She quit the show earlier this year.

But Addison could take Kourtney’s spot. During her chat with ET, the TikTok star talked about her possible appearance on Keeping Up With the Kardashians.

“I don’t know, who knows what the future kind of holds,” Addison told ET’s Katie Krause. “I’m kind of just living life day by day and going through everything with a happy heart and a humble mindset.”

However, she did tease that she’s working on some projects with Kourtney. The pair could be finding some ways to work together professionally. Addison told ET that she would love to have Kourtney and her mom, Kris Jenner, to join her and her mom, Sheri Easterling, on the Mama Knows Best podcast. But she feels that she could learn a lot from Kourtney in the meantime.

Addison also addressed the criticism over their friendship. She claims that they can relate to each other very well. Addison doesn’t get why fans are judging their friendship in the first place. She argued that friendships can come in many different age ranges.

“At the end of the day, I think friendships are just what you make them,” she explained. “What you have, like the time you spend with them, the things you enjoy doing. And if you have things in common, it just makes sense.”

What are your thoughts on Kourtney Kardashian’s friendship with Addison Rae? Do you find it uncomfortable as well? Sound off below in the comments section.