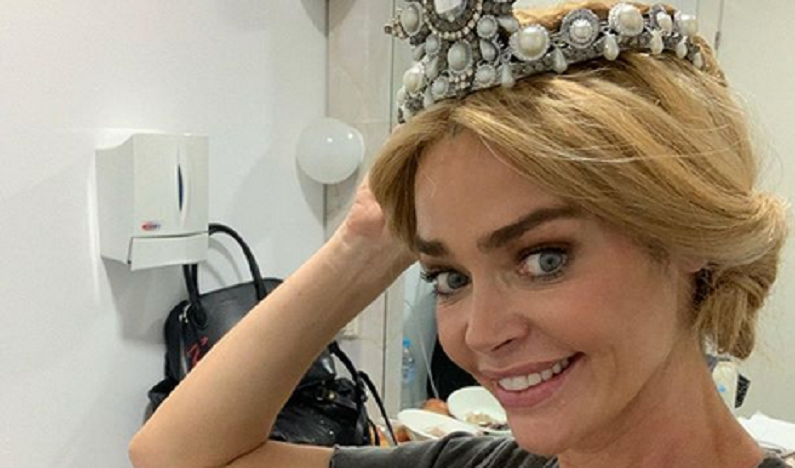 Denise Richards revealed why she looked “stressed” out at The Real Housewives of Beverly Hills. And it wasn’t because of her co-stars. Denise explained that it had something to do with her hectic work schedule. She didn’t just film RHOBH. Her IMDb profile is lined up with exciting projects this year.

Shortly after the first installment of the RHOBH Season 10 reunion aired, Denise went on the defense. She explained to fans why she looked so “stressed” out during that episode. This comes after fans claimed that Denise looked high during the reunion. Lisa Rinna first instigated the rumors by saying that her former friend looked drunk during her at-home confessionals.

The real reason why she was “stressed” during the virtual reunion

It’s not what fans think. One RHOBH fan deduced that Denise Richards felt “stressed” to be in the presence of the “Mean Girls” — a.k.a. Erika Jayne, Kyle Richards, Lisa Rinna, and Teddi Mellencamp. According to Reality Blurb, the fan reminded Denise of how they treated her this season. But the actress claims it had to do with work, nothing personal. Her packed work schedule led her to feel exhausted.

Filmed @BandB_CBS every day before the reunion & also next to me during the reunion over 50 pages of dialogue for 3 episodes of @BandB_CBS for the next day. I don’t know what made me think I could study during commercial breaks😂

She added a laughing-crying emoji at the end of her statement. It’s clear that Denise is taking it all in good stride. But she does have a lot on her plate lately and she has to deal with the drama from the ladies. Denise became the target in Season 10 because of Brandi Glanville.

Denise Richards is back filming in Spain

The Wild Things actress wants to focus on another type of drama. As per Daily Mail, Denise Richards traveled back to Spain to continue filming her new show, Glow and Darkness. The coronavirus pandemic caused production to shut down in March. A few months ago, the 49-year-old returned with Spanish producer and director Jose Luis Moreno, including her costars Natalie Radmall-Quirke and Victoria Summer.

Today on set… surreal to see how everything around us has changed. #glowanddarkness

Denise has shared behind-the-scenes moments of the show on Instagram. But before she dressed into her period costume, she wore a blue tank top with a navy blue sweatshirt tied around her waist. She looked just as tired as she did during the RHOBH Season 10 reunion. Denise sat outside and engaged in friendly conversation, and even hugged someone at one point.

The busy actress also had to film her scenes on The Bold and the Beautiful. That includes her love scenes with her husband Aaron Phypers. On The Kelly Clarkson Show, Denise explained that the actors have either their “husbands or significant others” film any scenes with close contact such as love scenes.

“So my husband has stepped in, which has been fun,” Denise said, as per People. “I’m really grateful that Aaron is able to come, and it’s been fun for all of us to see everyone’s husbands and wives on set.”

While Denise said that filming has “been a lot of work,” it’s “been really fun” to film her husband. They don’t have to act with each other. The reality star is “grateful” that B&B is back in production. The CBS soap was one of the first to resume production during the COVID-19 outbreak.

The second part of the three-part of The Real Housewives of Beverly Hills reunion airs Wednesday night, September 9 at 9 p.m. ET on Bravo.