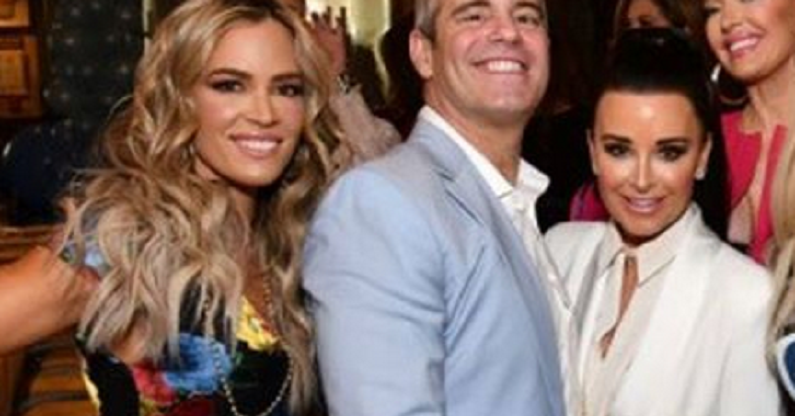 Teddi Mellencamp has to defend herself. She’s been criticized for her behavior on Season 10 of The Real Housewives of Beverly Hills. Fans never really liked Teddi. They claim she’s too “boring” and doesn’t have an interesting storyline of her own.

Others feel that she meddles into drama too much. They wish that she would take a step back and live her own life. Or, leave the show altogether. But that’s not happening anytime soon, as Teddi confirmed her return for Season 11.

Teddi Mellencamp doesn’t like the haters. She especially doesn’t like it when she receives online threats. As per Us Weekly, Teddi clapped back at an online troll who brought up her friendship with Kyle Richards. The 39-year-old hosted an Instagram Q&A with her followers.

Little did Teddi know, things quickly turned ugly. One user asked, “Why is your head up Kyle’s a**? Is there anything original about you?”

She looked into the camera and said with a smile, “Thank you, troll for joining us and coming up with such an original question. Wow.”

The accountability coach joked that she’s “so far up her a** I could barely make this Insta Story, but somehow I did it.” Teddi joined The Real Housewives of Beverly Hills in 2017. Since then, Teddi and Kyle have become some close friends. Their closeness even made Dorit Kemsley jealous, as seen in this season.

During the Q&A, Teddi added, “I think that Kyle and I have a real and authentic friendship and I don’t really know why I need to justify that. It is what it is.”

On Season 10 of RHOBH, most of Teddi’s co-stars commented on their close-knit bond. Both Teddi and Kyle didn’t want to hear about it. Despite Dorit’s jealousy, Teddi told her followers that “when they all stayed at my house here in Orange County, Dorit slept in my bed.”

Fans think Teddi is the “villain” of RHOBH

Teddi Mellencamp addressed the criticism that she’s being painted as the villain of the show. She took to Twitter to answer a fan, who asked her how she handles the online criticism. Several viewers have slammed Teddi for the way she handled the Denise Richards / Brandi Glanville drama.

“Okay, [Teddi Mellencamp]… do the people (and I use the word loosely) so determined to villainize you (when you are arguably the most human and relatable of the bunch) ever just get you down?” the fan asked.

No one wakes up everyday ready to face the world with a smile (no matter what it looks like on Insta!). But I do wake up knowing I’ve made a commitment to take care of my physical & mental health to help me get to that smile. Now more than ever that commitment is so important; so I can lean in to being present and feel at peace each day. Here are my top 5 recommendations for helping achieve that happy state of mind: ⁃ Do something active (sounds simple, it IS simple, but makes a big impact) ⁃ Spend quality time with the kiddos (or any loved ones) and have conversations about their lives ⁃ Journal (getting your feelings out on paper is so helpful) ⁃ Fuel myself with clean foods that make me feel good ⁃ Only follow Instagram accounts that bring me joy (this is a great tip!!) What did I miss? Share your faves that get you feeling your best each day!

“Honestly, I can handle most of what the show people throw at me,” Teddi responded. “There are just a select few who take it too far from behind their keyboards.”

She wants to hold her head up high amid the criticism.