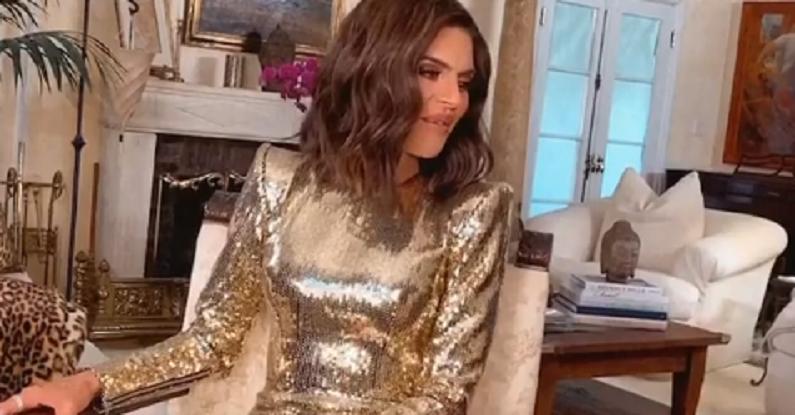 When you think of Lisa Rinna, you don’t think of Miley Cyrus. But the two have come together in an unlikely way. Rinna revealed that the pop star loaned her her disco truck. The singer released her new song “Midnight Sky.”

This comes after fans got major Lisa Rinna vibes at the 2020 MTV Video Music Awards. Some of them took to Twitter to comment that Miley resembled Rinna with her new haircut. During the performance, she busted some dance moves and even sang atop of a disco ball.

Miley is all about disco fever lately. Her new album is disco themed. And she’s going all out with her disco truck.

On Thursday, September 3, Lisa Rinna posted a clip on Instagram. Her and her daughter, Delilah Belle Hamlin, received Miley Cyrus’s disco truck, as part of the promo for her new single “Midnight Sky.” The clip starts off with Rinna and her daughter posing and dancing in front of the truck.

Rinna pulls off some dance moves as Delilah films her. In the clip, Miley’s new song plays in the background. Rinna lets loose in the truck that’s filled with disco balls. There’s also a stripper pole that the RHOBH co-star takes for a spin.

Meanwhile, Delilah takes selfies as she poses among the throngs of disco balls. Her 19-year-old daughter is glammed out in a sequin black dress. Rinna keeps it real and casual in a black camisole, black leggings, and sunglasses. At the end of the video, Rinna says that she “loves it.”

Here’s a litttle Bts. WE HAD SUCH FUN!!! Thank you @mileycyrus #midnightsky 💙 @delilahbelle 💥💫🌈 #DiscoTruck

“Here’s a little bts [behind the scenes],” Rinna wrote in the caption. “WE HAD SUCH FUN!!! Thank you @mileycyrus.”

Why is it called a disco truck? It’s a small freight track that’s decked out in silver glitter and disco balls. It must be a special truck because it plays Miley’s song when you’re close to it. However, it’s unclear why Miley gave Rinna the truck or what it has to do with the new single.

This comes after fans thought Miley looked like Lisa Rinna during her 2020 VMAs performance. One fan shared a photo of Miley’s red-hot performance along with the caption, “I don’t know about you but I’m getting @lisarinna vibes from @MileyCyrus.”

But not everyone agreed with the fan. “Don’t ever disrespect Miley like that again,” one fan responded.

What are your thoughts on Lisa Rinna dancing in Miley’s disco truck? Sound off below in the comments section.