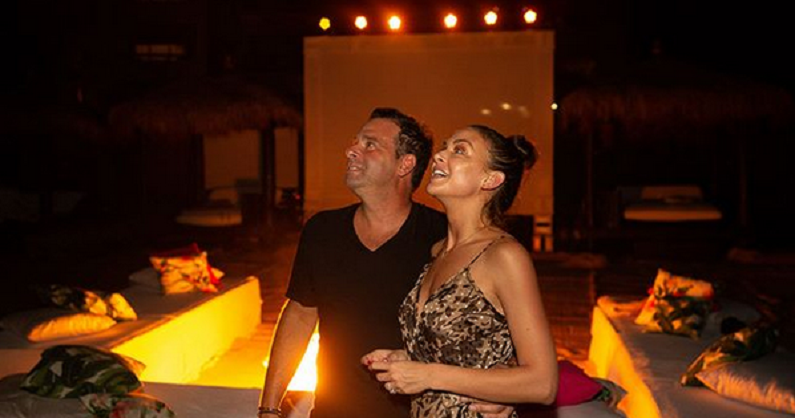 Lala Kent is expecting her first child with fiance Randall Emmett. The couple wants to take the next journey in their relationship. Since their wedding has been postponed, they want to expand their family. Lala and Randall announced their pregnancy news on their joint podcast, Give Them Lala… With Randall.

The exciting baby news was made on Lala’s birthday. Fans can tell that they’re excited about the birth of their first child. Even Randall couldn’t wait to share the news with his children. He posted an adorable video of his daughter Rylee’s reaction to Lala’s baby news.

Randall Emmett shares two children from a previous marriage with You actress, Ambyr Childers. London is 10 years old and Rylee is 6 years old. Randall took to Instagram to post a video of himself sharing the news with his daughter. He called it the “most magical video.”

The clip shows Rylee interacting with Lala, who’s behind the camera. Rylee explains to the VPR co-star how she’s going to break the news. In the caption, Randall explained to his followers that his daughter was the first to know about Lala’s baby news. So, she wanted to create a plan on how to announce it to the rest of the family.

Randall’s videos warmed the hardest of hearts. Vanderpump Rules fans took to the post to congrats the happy couple. Meanwhile, others couldn’t get over the cuteness. But most of them agreed that the video warmed their heart.

This is the most magical video! Rylee was the first person to know lala was pregnant and she was so excited to surprise me and all of us and this was her plan on how to do it! ❤️ #blessed the video is moving beyond words for me

“I loved hearing this story on the podcast & how Ry was the first to know. She’s going to remember that day for the rest of her life & be the BEST big sister. London too. Thank you for sharing. So so sweet,” one fan wrote.

“This made my heart so happy for y’all! My mom and I absolutely love the both of you and will pray for the health of you, your family, and your child!” another fan added.

The couple discussed their pregnancy journey on the latest episode of their podcast. They’re overjoyed with the news. Rumors have been swirling for months that Lala was pregnant. Now, she can finally confirm it.

Lala Kent’s pregnancy with Randall Emmett brought them “closer together”

The couple has a lot more to look forward to together. The Bravo star has been keeping her pregnancy a secret. While Randall Emmett and Lala Kent had their share of arguments during quarantine, they feel this has improved their relationship. It was the blessing they needed.

“Not many people knew and she wanted to share the news herself before people started to speculate,” an insider told E! News. “The pregnancy is still very early, but it’s brought her and Randall closer together. Quarantine has been hard on their relationship, but they are now in a great place and are very excited about the baby news.”

Lala and Randall wanted to see the positive side of things during this time. The insider told the outlet that she feels “it was meant to be” since she got pregnant. She wants to get married after their child is born.