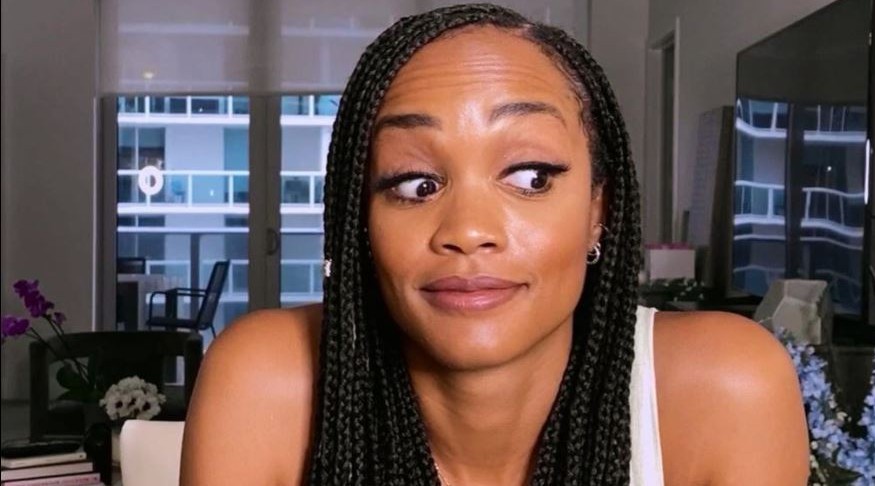 Fans of The Bachelorette know that Rachel Lindsay is very outspoken regarding the franchise and other things. One particular thing she has been vocal about is Becca Kufrin’s relationship with Garrett Yrigoyen. She made it clear she didn’t like Garrett or his beliefs. Many believe her views are partly what led Becca to walk away from her engagement. After all, they are co-hosts on a podcast together. Now that Becca has announced she and Garrett are over, Rachel is voicing her thoughts on the subject.

People shared what Rachel had to say about Becca’s split from Garrett. Rachel said, “Becca’s doing great.” She added that Becca’s starting over,beginning with her move to Los Angeles with dog Minno. She went on to say Becca is focusing on herself and building a relationship within her. Becca is learing who she is again without Garrett.

Rachel said, “She’s really just taking this time right now to center herself. There’s no denying that it’s hard when you dedicate two years of your life to someone and think you’re going to spend forever with them and it doesn’t work out, but I think she’s doing the best that she can be.”

At one point Rachel had even referred to Garrett as a piece of sh*t. Garrett has yet to speak out himself about the split.

She recently celebrated one year of marriage

Becca may be single again, but Rachel is going strong with husband, Bryan Abasolo. She and Bryan recently celebrated one year of marriage. For their one year anniversary they took a much needed trip to Aruba.

She said, “It was absolutely everything we needed and more.” Rachel continued, “It was extremely romantic. You can imagine being in quarantine for five months, you might need a little bit of a romantic getaway.”

Rachel says they are growing closer with each passing day. And, while quarantine has been tough on some couples, she says she and Bryan have only grown closer. She said, “We’re really great friends, whether we’re watching sporting events together, or we’re having a detailed conversation about what’s happening in the country. The foundation of our relationship is friends, and I think that having this time in quarantine was beautiful for us because we really got to connect again and spend every day together.”

And, Rachel and Bryan are starting to look towards the future. Their future includes having children. Will she be the next pregnant member of Bachelor Nation?