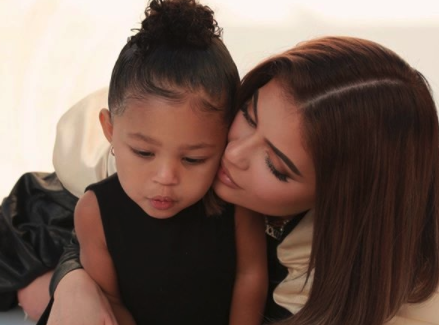 Kylie Jenner and Travis Scott share their daughter, Stormi Webster. Now, a source is revealing if Kylie Jenner would have any more children with Travis.

Stormie is already two years old. Rumors have been swirling that Kylie might be ready to give her daughter a sibling. A source is revealing if that’s true or not. Turns out, Kylie isn’t ready to stop expanding her family, however, it might not be any time soon.

“Kylie definitely wants more kids, she’s just not sure about if it will be with Travis, but again, it could happen one day,” a source reveals according to US Weekly.

The reason it may not be with Travis is that the two aren’t really officially together right now. Apparenlty the relationship between them has been shaky. They are currently in a good spot, but that doesn’t mean it will stay that way or that they are ready to add another child to the mix.

“Kylie and Travis have been so shaky for a while now. They are so on and off and it changes almost month to month,” the source says. “Definitely still have a physical attraction to one another and are on pretty good terms.”

However, the source also mentioned that Kylie may even be crushing on other guys right now. So, the two may not be getting back together any time soon.

“Neither of them is fully committed or attached to one another romantically at this time and Kylie is definitely crushing on a few other guys as of late,” the source says. “Maybe one day they will fully get back together, but right now doesn’t seem like the time, but again, their dynamic changes often. They are still young and figuring out their next steps.”

the best gift of all 🖤

Recently, it has been revealed that Kylie will be appearing in a new Kanye West/Tyga music video. Apparenlty it was actually created three years ago but Kylie and Tyga had just broken up. The video is kind of weird though. Kim Kardashian is laying on her back. Kylie Jenner walks out from in between her legs, making it look like Kim is giving birth to her little sister.

Apparently this was done to signify Kim Kardashian paving the way for Kylie’s claim to fame. While it’s a neat idea, it’s a very interesting execution.

Do you want to see Kylie Jenner and Travis Scott get back together officially? Let us know what you think in the comments below. Come back to TV Shows Ace for more news on your favorite Kardashian/Jenner family members.