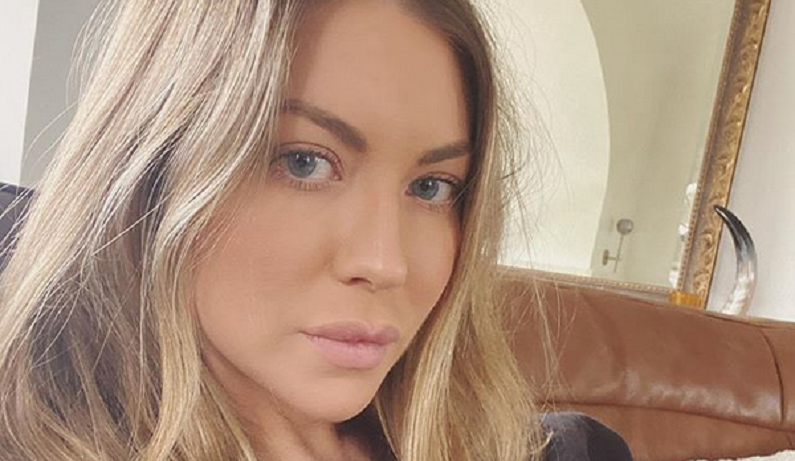 Stassi Schroeder is looking different these days. Of course, she’s going to look different. She’s pregnant with her first child. So, her fans are in shock whenever they see a new photo of her.

Stassi’s face is much fuller these days. But, she still has that new mother glow. Also, the Vanderpump Rules alum is no longer a blonde. She’s gone back to her natural brunette hair. Fans are reacting to Stassi’s recent photos.

Most VPR fans think she looks beautiful as a new mother. However, there are some who think she’s unrecognizable. Judge both of the photos for yourself.

Stassi Schroeder is very pregnant in a new photo

Beau Clark shared a new photo of his fiance on his Instagram Stories. In the photo, Stassi Schroeder shows off her ever-growing belly bump. The Vanderpump Rules alum has on a black turtleneck dress. Stassi also has on a full face of makeup. She looks up from her phone to glance at the camera.

In the text overlay, Beau wrote, “Decorating early for Halloween.” Stassi is the Queen of Halloween, and she sure looks ready for Spooky Season. Beau’s Instagram Stories was reposted on @moxeyblondebravo. Fans commented on how beautiful Stassi looked in the photo.

“Stassi you’re glowing and beautiful… Cute as hell while being pregnant,” wrote another user.

But some were shocked to see Stassi looking more pregnant than ever. The Next Level Basic author isn’t due until January 2021.

“You look huge… I didn’t think you were that far along… twins?” one asked.

“Love this!!! So excited!!!! But how did it go from barely there hump to this in a couple of months?” one fan asked.

Beau Clark previously shared this photo of Stassi Schroeder on his Instagram Stories. As TV Shows Ace previously reported, the couple went swimming. Beau shared a series of clips and photos of the couple out on the lake. Stassi even swam without a life vest.

In Beau’s previous photo, Stassi wore a navy-blue bikini with a matching sarong. She accessorized her look with a floppy hat.

“My Sweets,” Beau captioned his Instagram Stories. However, some of Stassi’s fans commented on how different she looked.

“Not her! Don’t believe it,” one Instagram user wrote. At first, another fan thought Stassi was Landon Clements from Southern Charm.

Stassi showed off her roots earlier this year

Back in May, Stassi Schroeder gave fans a glimpse at her quarantine life. In April, she removed her hair extensions. In an Instagram post, she encouraged her followers to “free” themselves during this time. She kicked things off with a makeup-free selfie, showing her with her natural roots.

Her face is covered in red blotches from psoriasis. Stassi captioned the photo, “It’s a mood: roots out, psoriasis covered face.”

Here’s a little no makeup Monday realness. Pretty sure last night’s GOT episode worsened my psoriasis.

Do you think Stassi Schroeder is unrecognizable in her new photos? Sound off below in the comments section.