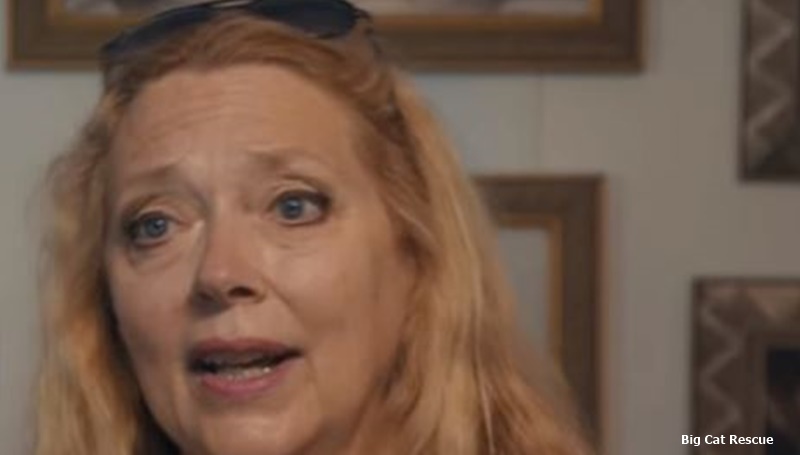 DWTS released the list of cast members for the upcoming show. When the ABC list revealed Carole Baskin features, fans reacted with shock, outrage, and surprise. Of course, she earned notoriety on the Netflix show, Tiger King. Plenty of fans totally believe the theory that she murdered her husband and fed him to the lions.

Dancing With the Stars fans who also watched Tiger King, know that Carole’s a bit of an odd person. They also heard that after the show aired, Hillsborough County Police re-opened the case involving her disappeared husband. Rumors ran wild that she killed him, and possibly fed him to big predators. Actually, social media followers seem convinced of her guilt.

Certainly, right now it appears that no evidence comes to light that might convict her of the death of Don Lewis.  The Big Cat Rescue personality might not be convicted in a court of law, but DWTS fans on Twitter already made up their minds. Plenty of conspiracy theories convinced them of her guilt. A storm of protest arrived and a lot of rather witty comments.

Fans tweet about Carole ‘killing it’ on the show

Dancing With the Stars fans naturally reacted to the news about Carole. One of them alleged, “So are we as a nation applauding a murderer by casting Carol F–king Baskin in #DWTS ??! She murdered her husband.”

Another DWTS fan noted, ” The fact that the entire world knows carol baskin killed her husband (whacked him) and was asked to be on a popular national show continues to prove that 2020 is in fact a black mirror episode, convince me I’m wrong.”

Honestly v upset #DWTS is going to have Carol Baskin on as a contestant. She is literally famous for killing her husband and abusing big cats… aren’t they a family show…..?

Furiously, one critic demanded, “BRO THEY DID NOT PUT CAROL F–KING BASKIN ON #DWTS. Who’s idea was this?” Meanwhile, others said they don’t usually tune in. But, they intend to watch the next season of the ABC show. And, say no more! After all, a controversial person probably racks up the ratings somewhat.

One fan joked with a bit of black humor. They wrote, “So Carol Baskin is going to be on @DancingABC. and I just know she’s going to kill it!” Then, someone said, “And just when you thought 2020 couldn’t get any more weird … Carol Baskin on #DWTS. #Makeitstop #2020.

Keeping the DWTS jokes alive, another person tweeted, “All these people with the Carol Baskin tweets joking about her ‘killing it’ / ‘making a killing’ on #DWTS are so lame. She won’t make it past the second episode. I’m not lion.”

What do you think about ABC casting Carole Baskin on DWTS? Sound off in the comments below.