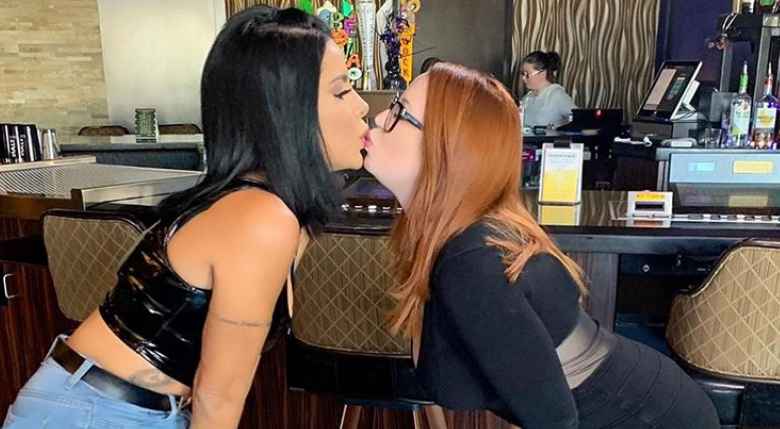 Best of friends! A sneak peek reveals Jess Caroline finally meeting up with Larissa Dos Santos Lima on 90 Day Fiance: Happily Ever After? This crucial meeting comes shortly before the release of the latest TLC spinoff, HEA Strikes Back.

90 Day Fiance: Happily Ever After? spawns HEA Strikes Back

The latest spinoff comes in the wake of the success of B90 Strikes Back. It will feature the couples from Happily Ever After? rewatching their TV journeys. They will also react to comments and opinions from their fans, while simultaneously giving them a look at their home lives.

HEA Strikes Back will also include self-shot footage, along with details the cameras missed the first time around. What makes the idea so exciting is that the couples will address some of their most cringe-worthy moments from the latest season, starting from the first episode.

The timing is perfect too, as HEA Strikes Back airs on Monday, October 5, following the finale of 90 Day Fiance: Happily Ever After? There are sure to be some great moments to watch!

E! News has released an exclusive sneak peek, showing Jess meeting Colt’s ex-wife Larissa for the first time in person. As they discuss Colt, Jess soon realizes she could have taken cues from the woman who came before her. Fans will recall that Larissa and Colt were divorced in the spring of 2019.

Next Sunday on happily ever after ❝ To all the little girls who are watching this, never doubt that you are valuable and powerful, and deserving of every chance and opportunity in the world to pursue and achieve your own dreams ❞ @jesscaroline_ ——————————- #90dayfiance #womensupportingwomen #womenempowerment #90dayfiancehappilyeverafter #latinaspower #90diasparacasar #tlc

Jess can be heard in the clip, explaining to Larissa that she believes Colt only dated her to make Larissa jealous. However, Larissa responded, saying it had looked to her that Colt had found true love with Jess.

Jess tells Larissa that she has always wanted kids and Colt had promised they would have them. However, he doesn’t seem to be keeping his promise. Larissa agrees that this is typical Colt – he loves not keeping promises.

Speaking in her confessional, Jess says she wished she had listened to Larissa when they spoke on the phone. She says, “Colt broken my feelings and Colt don’t care about me.” Jess adds, “I wish I listen to Larissa when she called me and said, ‘Jess, be careful, Colt is trash man.'”

Watch the sneak peek clip on the E! News website.  Also, make sure you see Jess and Caroline meet on 90 Day Fiance: Happily Ever After? on Sunday at 8 pm. Catch the TLC spinoff, HEA Strikes Back when it premieres on Monday, October 5 at 9 pm on TLC.