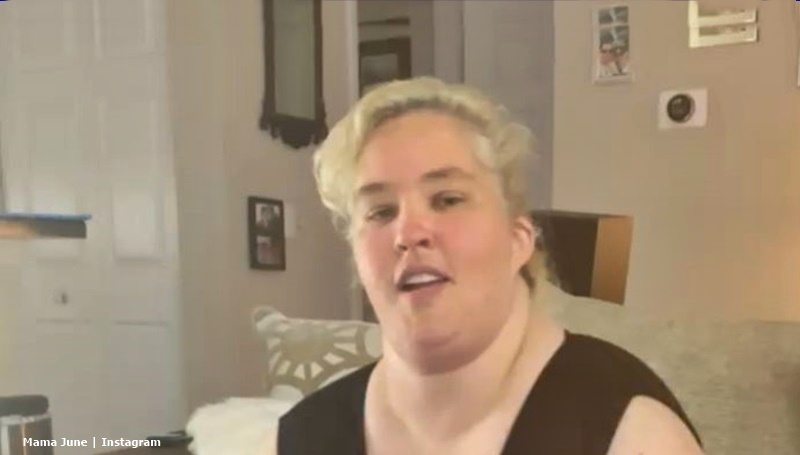 Mama June recently celebrated seven months of sobriety. In fact, she now helps other addicts who look for rehab and who need encouragement. Getting herself together took courage and determination, WEtv fans agree. So, when a troll popped up on Pumpkin’s Instagram, they slammed them.

On Monday, Pumpkin (Lauryn Efrid), shared a cute photo of Ella Grace. Mama June’s grandchild really grows into a little beauty, fans agree. So many Mama June: From Not To Hot fans said how pretty and cute Ella Grace a.k.a Tinks looks these days. In the photo, Tinks wore a rainbow-striped dress. She smiled very sweetly for the camera.

Mama June’s sister, Doe Doe commented, “There’s that precious face I am missing❤️.” Plus, Pumpkin’s mom, June also commented. She wrote, “Love some tink n her dresses.” Immediately, a troll decided that negativity might help June…or not. The negative comment really upset those fans who root for June right now.

Mama June in recovery reaches out to other addicts

Mama June got a lot of critics when fans heard she abandoned her daughters. Fair enough, back then, she sold the house, and admitted she and Geno spent all their money on meth. In Family Crisis, fans heard that she blew about $2,500 daily on their habit. But, she agreed to rehab and now lives in Florida.

As aforementioned, Mama June now reaches out and helps other addicts. She works out, gets fit, and also finds her dignity again. It takes a lot of hard work to break a drug habit. Now, fans encourage her. They know that negativity really doesn’t help. After all, Drug Free World notes that meth can bring on “psychosis, depression,” and even “brain damage.” It’s not the easiest state of mind to help when fighting the addiction. So, Mama June needs positive encouragement, not trolls.

Instead of sharing the joy that others felt that Mama June reached out to Pumpkin and her child, a troll got nasty. They wrote, “you must not have loved her that much to choose drugs and geno over your [own] kids.” Later, when fans slammed them for negativity they added, “once a addict always an addict.” And, they said, “you always need some negativity to balance it out.”

Fans of Mama June disagreed. One said, “she is clean and sober so leave her alone. She’s doing well and her girls are loving it. Stop with the negativity.” A fellow addict noted, “I am a year sober this month. There IS hope. It IS possible to change for the better and stick to it. Yes, we are all once an addict, always an addict. But some of us actually care enough to change.”

They also wrote, “just because we fell off the wagon doesn’t mean that we didn’t love anyone any less than we did when we were straight and sober. None of us want to ruin our lives. It happens in the blink of an eye. It’s what you do to change it that counts.”

My heart outside my body ❤️🥺. @ellagraceefird

What do you think? Should fans rather focus on the positives than slam Mama June for making bad decisions in the past? Sound off your thoughts in the comments below.

‘Y&R’ Spoilers: GAME OVER! Phyllis Blows Tara And Sally Up?
Tammy Slaton Celebrates Birthday: How Old Is She, Anyway?
See New Photos Of Lawson Bates Like You’ve Never Seen Him Before
Scheana Shay Confirms Engagement, Feels At Peace With Life
‘Days Of Our Lives’ EXCITING Comings & Goings: Johnny DiMera All Grown Up – Rex Brady Back