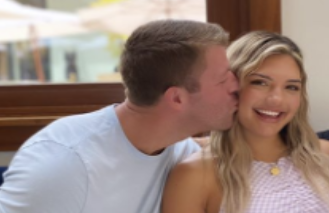 Love Is Blind‘s Damian Powers and Giannina Gibelli want to put a stop to all the breakup rumors. According to the couple, they’re very much in love. Giannina even recently posted a sweet photo of the pair at dinner recently and captured it, “My dinner dates.” 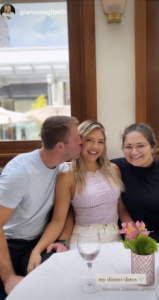 So what was all the drama with Francesca Farago from Too Hot To Handle about?

We recently reported on how Damian and Francesca were seen leaving a restaurant together and she seemed to take his arm. The Too Hot To Handle is particularly known for her string of dates, so it doesn’t seem unthinkable she may go out with Damian Powers. However, Damian has been in a relationship with Giannina Gibelli for quite some time. The situation was understandably confusing to fans.

Since Francesca’s breakup with her own co-star, she’s excited to play the field.

“Over the past week, I have been in L.A. with my attorney, Alex Ion, pursuing new projects and business ventures. Francesca and I both share the same attorney,” Damian explained at the time.

Apparently, the paparazzi waited for them when the group left the restaurant. According to Damian, Francesca grabbed his arm to shield herself from the flashing cameras. He emphatically stated they are only good friends.

The Couple Remains Committed to Each Other

However, Love Is Blind fans speculate there may be more to the story. Damian and Giannina have a turbulent past. The couple argued often throughout the season and he left her at the alter in the end. But in spite of everything, they managed to rekindle their relationship off-screen.

“He was surprised when I reached back out to him later that night to talk things out,” Giannina told Life & Style. “I felt like we had unfinished business, and it didn’t feel right to leave things on a sour note, so he snuck us back into our old apartment. We cried it out, healed together and haven’t been apart since.”

Perhaps Damian and Giannina really are in a healthier place now. On the reunion special, Giannina described how much she really enojoyed dating Damian. Their relationship has had more time to grow without cameras around.

Love Is Blind Gets A Second Season

Love Is Blind execs announced casting for the show’s second season back in the spring. The pandemic probably had an effect on those plans, but no one is sure to what extent. Hopefully we will have another season by next spring!

For more stories like these, be sure to follow TV Shows Ace on Facebook and Twitter. We’re excited to keep you filled in on all the latest celebrity and entertainment news out there. Leave your thoughts in the comments. Are you excited for a Love Is Blind Season 2?