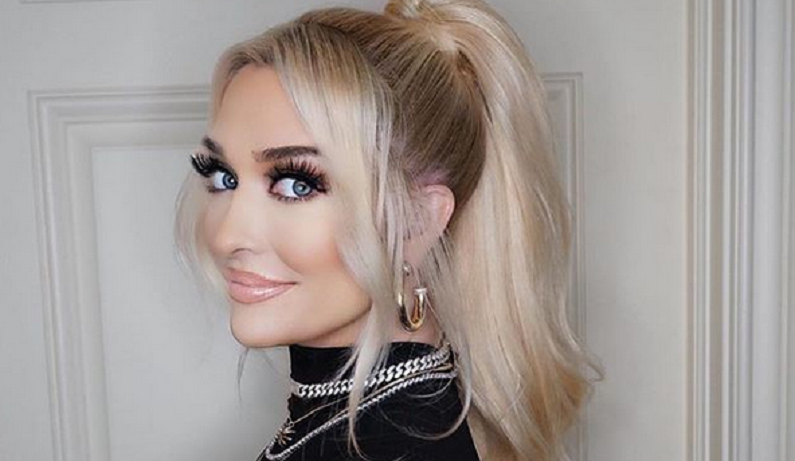 Erika Jayne has received backlash over her behavior on Season 10 of The Real Housewives of Beverly Hills. She’s been lumped in with the “Mean Girls” — Kyle Richards, Lisa Rinna, and Teddi Mellencamp. However, she wasn’t present for the latter part of the season due to her big break on Broadway.

But she made it clear that she’s on Brandi’s side amid her ongoing drama with Denise Richards. Despite the controversial season, Erika still has plenty of dedicated fans. She’s clearyl one of the popular co-stars on RHOBH. She shared a rare photo from her childhood that drove fans wild.

Erika Jayne shows her childish side

On Tuesday, September 1, Erika Jayne shared this sweet throwback photo of herself from her childhood. In the school photo, little Erika wore a blue denim dress with a white blouse. The singer also had a coy smile on her face. She jokingly called herself a “6-year-old skeptic” in her caption.

RHOBH fans loved seeing this side of Erika. Most of them have been clamoring to see her softer side. Others want to see more of her life on the show. This comes amid the cries that RHOBH is fabricated and only focuses on the drama.

Fans flocked to Erika’s post to share their support. “And now a bloody legend,” one fan wrote. “A 6-year-old that has a bright future!” another fan added. “Amazing. Some things never change,” a third RHOBH fan wrote alongside the laughing and crying emoji.

Most fans called Erika’s photo “cute.” No matter what, Erika still has the love and support from her fanbase. Even one commended her for the way she behaved on Season 10 of RHOBH. They found it “inspiring.”

“Loved watching the show today where you talked about seeing the [people] board the private planes while you were at work,” the fan enthusiastically wrote before adding, “and now you do it. Such a classy woman who accomplished her goals and dreams in life and at same time inspiring others. Go girl!!”

The raving comment received over a handful of likes. However, this isn’t the first time that Erika has shared a childhood photo of herself. She last posted this black-and-white photo of her with short hair. Erika captioned the post “Icy since 1971.”

RHOBH star accused of going under the knife

Erika Jayne was previously accused of going under the knife. Fans thought she was unrecognizable in one of her glam photos. The 49-year-old wanted to show off her bronzed look last month. But followers wanted to know what she did to her face.

Not everyone loved Erika’s latest photo. Some of them said that her new look made them “cringe.” Meanwhile, others asked “Whose face is that?” and “Who that?” Another follower directly asked Erika, “What did you do to your face? You look so different!”

Some fans felt that her new look was attributed to “too much filter.” Then one fan told her to “be original and unfiltered.” It sounds like the fans want more natural photos of Erika. What are your thoughts?