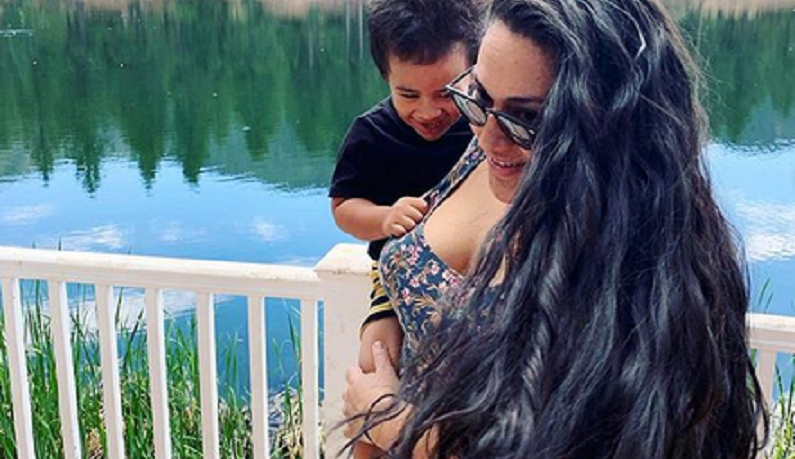 90 Day Fiance star Kalani Faagata is clapping back at the critics. She says they should watch a documentary on Samoa if they want an accurate depiction of their culture. This comes amid Kalani’s ongoing drama with husband Asuelu Pulaa and his sister Tammy Pulaa.

Their money issues have led to an intense argument. Kalani and Tammy almost got into a physical altercation. This came after Asuelu’s family demanded the couple for money.

But fans think the show is fake. They think it’s not an accurate representation of Samoan culture. See what Kalani has to say about this.

Kalani fights back at the critics

On Monday, August 31, Kalani took to Instagram to address common misconceptions about the show. That’s when she told the critics to watch a documentary about Samoa. She claims that she’s on a reality TV show about her life, no one else’s. According to Kalani, it’s not going to be an accurate portrayal of Samoan culture.

“I’m on a reality TV show about my relationships. I’m not on a show that explores the ethnography of Samoa,” Kalani wrote. “It is not my obligation, nor Asuelu’s, to spoon-feed fa’asamoa to those with ethnocentric ideologies, who specifically watch the show for drama.”

The TLC personality said that plenty of information is “readily available” for “anyone” who wants to learn about the culture. A reality show is not the first place that people should look.

I’m on a reality TV show about relationships. I’m not on a show that explores the ethnography of Sāmoa. It is not my obligation, nor Asuelu’s, to spoon-feed fa’asamoa to those with ethnocentric ideologies, who specifically watch the show for drama. Information about Sāmoa and fa’asamoa is readily available for anyone willing to look and learn. If people are incapable of entering a 5 letter word into a search engine, why would anyone care about their perceptions in the first place? Some of you are responding to these people by shitting on us, rather than enlightening them. If you’re truly upset about perceived misrepresentation, and not just bandwagon upset, why not tag informative pages like @samoatourism or @measinasamoa? Why not use those instances to share links to www.samoa.travel to let people see the beauty of Sāmoa and to read about our history and culture? Why not use that same energy towards the actual well-being of our people, instead of wasting it on seeking pālagi approval? Did you know you can feed a family in Sāmoa for $20 USD a month? Did you know that same organization, @browngirlwoke, also holds workshops for our girls to teach them about their periods and make the topic less taboo? Did you know that they are actively working to help our people break the cycle of domestic violence and abuse, amongst a laundry list of other things? Did you know that @svsg_be_the_change shelters our abused and neglected women and children? Did you know they have a program for the nofotane to empower them and learn to provide for themselves? Did you know it’s super easy to donate to both and you can choose any amount you’d like to give? (Both links are in my bio.😉) Being a faika is not more important than the generational growth and progress of our people. If y’all wanted the historically accurate portrayal of fa’asamoa from us, we’d be on National Geographic. (But, we too ratchet for that, and y’all wouldn’t watch that anyway.)😛 So, put your money where your mouth is and JUSS GEEV DEM DA MONEHH, DAS ALL I WAN! Screenshot your donations and I will post them to my story. 🤗💕

“If people are capable of entering a five letter word into a search engine, why would anyone care about their perceptions in the first place?” Kalani asked her followers. “Some are you responding to these people by s***ing on us, rather than enlightening them.”

Kalani advised her followers to follow @samoatourism or @measinasamoa on Instagram. She also included the account @BrownGirlWoke. The 90 Day Fiance alum told her fans that the organization holds workshops for “[Samoan] girls to teach them about their periods and make the topic less taboo.” The community was created to “break the cycle of domestic violence and abuse.”

The Season 5 star says the reality show is not on “National Geographic.” Instead, she wants the fans to “put your money where your mouth is” by donating to these organizations.

Amid the criticism, Asuelu’s sister revealed the show is fake. Most of their arguments about money were scripted for drama. She has proof of that as TV Shows Ace previously reported. Despite what Kalani said on this season of 90 Day Fiance: Happily Ever After, Asuelu still sends money to his family.

She also revealed that the crazy arguments were scripted. She and her father have financially benefitted the most from those scenes. However, it’s not clear if Asuelu’s family gets paid to appear on the show. Mostly, the Americans get a stipend for their appearances.

No money…more problems. Here's what happened last week on #90DayFiance: Happily Ever After.

“Let me tell the world, I’m the only one who benefits from that TV show. They just act only but THEY send the money over to Samoa for me and my dad to spend it all.”

Most viewers sided with Kalani. They didn’t think she would back down without a fight. However, it’s likely that the couple could be making more money since they became alumni. Asuelu reportedly has a full-time job as a Samoan dancer, which could help him support both of his families.

90 Day Fiance: Happily Ever After airs Sundays at 8 p.m. ET on TLC.