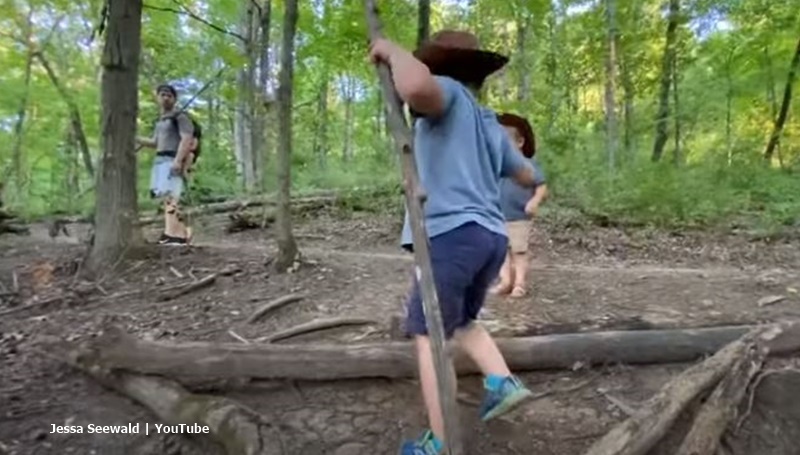 Duggar fans really like Jessa Duggar and Ben Seewald’s little boy Spurgeon. The cute little guy seems very active and at an adorable age. Recently, we reported that he photo-bombed a video of his sister Ivy. He tried balancing in a steel bowl. Now, he and the rest of the family went off for an adventure. And, he really enjoyed the outing.

On Sunday, Jessa shared a new video on their YouTube channel. It revealed the family exploring around Kessler Mountain in Fayetteville, Arkansas. Hiking along the trails, Ben looked after little Ivy. Spurgeon and his little brother Henry, safeguarded from the sun with big hats on, eagerly explored as they walked along.

Clearly, the Duggar family watches the Bear Grylls shows. Spurgeon found an empty snail shell and declared that maybe Bear ate it. Spurgeon’s so cute, he rushed over to the inspect the map of the trails. Ben warned the boys to watch out for mountain bikers and snakes. Spurgeon spotted the “bike tracks.” But, it seems that he came along prepared for anything. The little Duggar boy carried his water pistol with him, ready to shoot any “bad guys” they might meet on the trail.

Henry also participated in the hike and when the trail forked, he chose which way to go. Mom Jessa talked about how quiet it was in the woods. Then  Spurgeon said that their own “backyard makes that sound too sometimes.” The hike led them up a hill and Jessa already felt tired. Henry told her that’s obviously because they went from “way down there to way up here.”

Along the way, Ben caught a daddy longlegs spider. Mom and dad reassured the boys that he couldn’t bite them. When they moved on, Spurgeon told Henry that the “spider needs his family.” Later, when Spurgeon found an acorn, he went and showed it to his little sister Ivy. But, she didn’t look very impressed with it. No wonder Duggar fans adore Jessa’s little family.

Ivy’s a bit young to enjoy snails, spiders, and acorns, and the little girl fell fast asleep. Still asleep, the family came across a snake. So, Ben took the time to teach the kids about staying away from them. After that, Ben looked a bit nervous and he told the family he made a big walking stick to protect them. No birds called, and Ben worried something seemed wrong as it was “too quiet.”

Ben gave the Duggar boys their own sticks to “beat off any wild animals.” Spurgeon set off down the trail with his stick, he said, “I’m the cowboy named Lone Ranger, with a big walking stick.” Oh, and “one big gun.”

The family certainly enjoyed their day out on the hiking trail and Speigeon seemed very taken with the adventure.