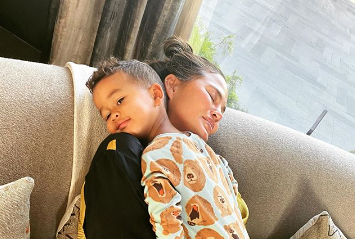 Chrissy Teigen often shares a lot about her personal life on her social media accounts. A lot of her fans are endlessly entertained by her opinions and stories. Her posts include shows she binges and her true thoughts about them. Recently she posted about Selling Sunset trying to determine if they were really working in real estate. She got responses from the stars of the show saying they were legit. Even one of the owners of the Agency featured on the show tweeted back to her.

Now she took to Twitter to share her husband John Legend’s opinion of the Housewives franchise. When watching a show like Real Housewives of Beverly Hills he shared some gripes about the show with her. Chrissy made sure to share them with her followers.

John has two big housewives gripes he never shuts up about. 1, not acknowledging money made from the show (pretending it has nothing to do with why some are rich) and 2, the forced getaways that are written into the show. IE, “I feeeel like we all need to bonnnnd”

What Did Chrissy Teigen’s Husband Say About the Housewives?

Chrissy Teigen said her husband had two things he considered problematic about the shows. She posted, “John has two big Housewives gripes he never shuts up about. 1, not acknowledging money made from the show (pretending it has nothing to do with why some are rich) and 2, the forced getaways that are written into the show. IE, “I feeeel like we all need to bond.”

Lots of fans agreed with these two gripes. One said, “I want to know 1. Who pays for the trips? 2. Where do the drivers go when they’re dropped off at an event or do they get ubers? 3. Do they split the checks? 4. What if they both walk away from the dinner? Who pays for it? Production? 5. Do they split the hotels?” These are relevant questions about the show, because, these are things they don’t usually talk about. It isn’t common for stars on Housewives to break the fourth wall, so to speak, and to mention the cameras, because they keep the illusion alive.

Chrissy Teigen revealed the gripes belonged to her instead of her husband. She said, “ Guess what bitches !? Those are MY gripes but your asses always agree with everything John says so HA! Get out of here with your “Well he ain’t wrong” “it’s true!!!” asses!!! If I said it you’d be like “Chrissy girl NO delete.”

Fans still agreed with her even when they found out it was her opinion. One fan praised her saying, “the bait and switch here is masterful.” Chrissy is currently pregnant so she tweets about her cravings. At seven in the morning she tweeted, “Up and eating pounds of sour cream and onion Ritz chips, a highly rated food in my household that I think only I own.” Fans will continue to follow Chrissy and John for their opinions on television, food and other things. This is because a lot of them cite the tweets as the highlight of their day.