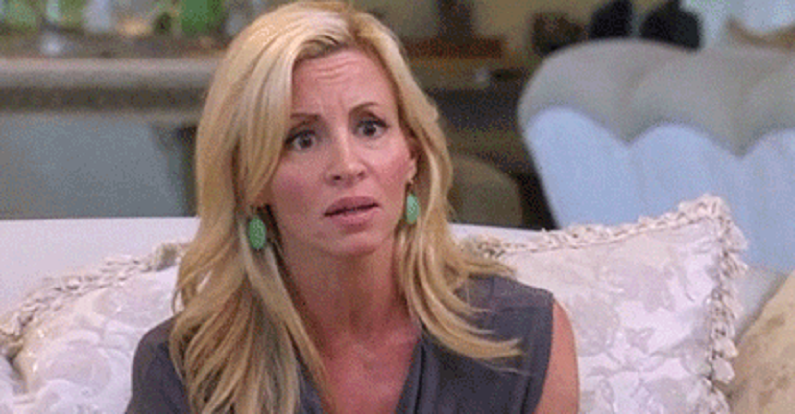 Like most people, Camille Grammer is confused about this season. Brandi Glanville made her big return to Season 10 of The Real Housewives of Beverly Hills. She left the show back in 2015. In the previous seasons, Kyle Richards stated that she didn’t trust Brandi. But her feelings have since changed.

Brandi revealed to Kyle and Teddi Mellencamp that she allegedly slept with Denise Richards. That revelation became the entire plot of this seaosn. Now, Camille is giving her input on this season. She wants to know who the liar in the situation is.

She shared a throwback video on social media.

On Sunday, August 30, the RHOBH co-star took to Twitter to post an old clip from the show. In the clip, Kyle tells Brandi that she’s a liar.

Camille wrote in her tweet: “Agreed! Who is the liar? Which is it? I’m confused.”

It appears that Camille was throwing shade at Kyle. Fans think Brandi and Kyle made up the drama this season. They came out of the show better friends than they were in previous seasons. However, not all the fans agreed with Camille’s tweet.

Some of them wanted to know why she was getting involved in RHOBH drama when she’s no longer on the show. “Why do you keep posting about this stuff?” one fan asked. “Are you trying to get back on RHOBH? If not why don’t you just stay out of it all?”

However, most fans were on Camille’s side. They thanked her for bringing up the old clip. Camille proved that she was on #TeamDenise. The two even had a secret meeting during Season 10 of RHOBH.

Kyle doesn’t buy the newfound friendship between Denise Richards and Camille Grammer. Following the season finale of The Real Housewives of Beverly Hills Season 10, she weighed in on the ladies’ friendship. Kyle feels that it has something to do with Denise’s behavior in Rome.

“Something happened where they started talking and I don’t know if that was Denise looking for some inside [info] or whatever it was but I can tell you that it wasn’t them needing to make peace with each other for just the hell of it,” Kyle said on RHOBH: After Show, as per Reality Blurb.

“They weren’t exactly missing their friendship with each other,” she added.

Kyle also addressed her own friendship with Camille. Fans remember that the two made amends in the first episode. Kyle said they were “actually okay” until Camille called her out on Twitter. She feels that Camille manipulated Denise when she joined the show.

“I don’t know if Denise reached out to Camille or Camille reached out to Denise but she’s putting it in someone like Denise’s head, who is new to the show, ‘Oh, Kyle is running the show and telling everybody what to do,'” Kyle said. “It was actually apparent to me in Rome, Denise was literally, of all the things that happened, she was directing everything toward me. So there was something going on there for sure, which I knew. It was very frustrating to me.”