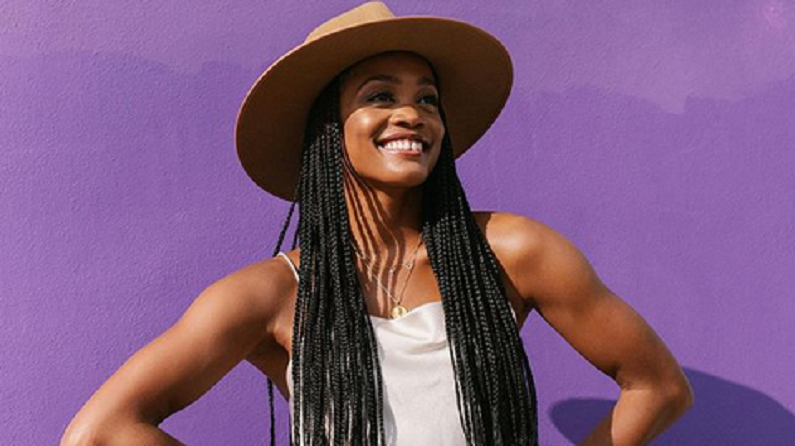 Rachel Lindsay has questions about the new Bachelorette poster. She criticized ABC’s promo for the new season featuring Clare Crawley. The former Bachelorette shared her thoughts on the controversy surrounding the ad. There’s a lot of confusion about the upcoming season and the poster itself.

Rachel always speaks out about the Bachelor franchise. She made history as the first-ever Black Bachelorette. Since then, she uses her platform to call for more diversity within Bachelor Nation. Now, she’s discussing the new Bachelorette poster.

Fans have also been confused about the promo poster. It’s brought up lots of questions about what it means and about Clare’s season.

What’s wrong with The Bachelorette poster, you ask? It’s a tribute to the classic film, The Graduate, starring Dustin Hoffman and Anne Bancroft. It’s about an older woman who seduces a recent college graduate. Rachel Lindsay made it clear that she’s not a fan of the poster.

It shows Clare Crawley wearing a gray velvet blazer and jeans. She also holds a single rose in her hand. She leans against a white wall, while in the foreground, a man seductively puts on his sock. It’s a gender-reverse tribute to the 1967 film. The tagline at the top of the poster reads, “It’s about time.”

At 39, Clare is the oldest Bachelorette in the franchise’s history. Most of the men cast for this season are much younger than her, with ages ranging from 25 to 40. Rachel made an appearance on EW Live on Sirius XM. While she hasn’t seen the movie, she didn’t like the reference to it on the poster.

Get ready Bachelor Nation! @clarecrawley's season of #TheBachelorette premieres Tuesday, October 13th at 8|7c on ABC. It's about time. 🌹

“I didn’t like it,” Rachel said. “I didn’t understand it and I don’t think we should be questioning what the ad is and that’s what we are talking about more than we are about her and her season, ’cause I’m excited for Clare.”

Rachel said she’s not sure how Clare’s season will work with the “rumors that are going around.” But she’s still “excited” for Clare to finally “have this moment.” When host Jessica Shaw explained the plot of The Graduate, Rachel was not happy.

“That’s the movie?!” she said with a laugh, adding, “OK, I’m watching it tonight. What?! Now I’m hot. I gotta call somebody. I did not realize that. OK, now I’m a little bothered.”

Rachel Lindsay is not the only one who is “a little bothered” by the poster. Some fans have taken to social media to criticize The Bachelorette poster. They feel that ABC shouldn’t have made Clare’s age such a big deal. Others didn’t like the tagline, “It’s about time.”

“Turning Clare Crawley into ‘Mrs Robinson’ because she’s THIRTY NINE is making me mad??” one fan asked on Twitter.

“Making Clare into ‘Mrs. Robinson’, an older lady who seduces a young man only for him to fall in love with her daughter, is *a choice*,” another wrote.

Others are simply confused. Rumors swirled that Clare will be replaced by Tayshia Adams, who is 10 years younger. However, she’s not replaced because a man prefers Tayshia. According to the rumors, Clare already found love and doesn’t want to waste her time dating a group of men.

Gender-swapping the poster doesn’t make it any better either. Clare is not that “old,” even by dating standards. The only reason she’s “older” is because the producers fail to cast age-appropriate men. Plus, why does it say “it’s about time” that Clare found love?

What are your thoughts on the new poster? Share them below in the comments section.