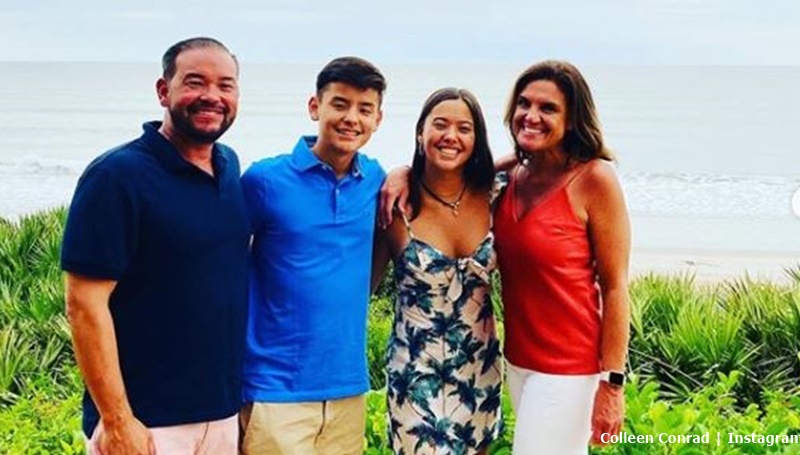 Jon Gosselin, his son Collin, his daughter Hannah and his girlfriend Colleen Conrad on a mini vacation. They went to Ponte Vedra. Fans couldn’t help but notice how very tall Collin is these days. Actually, he now stands taller than Colleen and catches up to his dad.

Jon Gosselin, his son and daughter enjoy a break with Colleen

The last time that Colleen and Jon enjoyed a break with friends and family, fans quickly asked where Collin was. They show a lot of concern for him as his mom Kate sent him to an institution. Now, he lives with Colleen and Jon and seems a well-adjusted young man. But, he suddenly shot up and fans can’t get over how tall he looks.

Colleen shared a photo on Saturday, August 29. It showed her standing alongside Hannah, Collin, and Jon Gosselin. She captioned her post with, “A quick, short but amazing and also needed quick vacation! Love my family and our friends in Ponte Vedra!!!”

Fans can’t get over how tall Collin looks

Plenty of fans commented about Collin. One said, “I almost didn’t recognize Collin, he’s taller and even more handsome than he already was. Such a beautiful family. Thank you for sharing these photos with us Jon. 🙂.” Well, if you look at the photo, he looks like he’s catching up with his dad. And, he’s actually taller than Colleen.

Others loved that big smile on Collin’s face. And many of them thanked Colleen for giving Hannah and Collin a loving and stable home. Jon Gosselin and Colleen lived together for about five years now, and clearly, they love each other very much.  Fans like it that at least two kids got out of the toxic family atmosphere Jon and Kate created when they were married.

Colleen and Jon Gosselin seem very much in love

The day before Colleen shared her photo of Collin and Hannah, Jon shared about their special date. We reported that “in response to Jon’s post, several of his followers [said] how happy both of them look. They are glad that Jon is doing so well, especially after they witnessed the messy relationship that he had with Kate.”

In May, the former Jon & Kate Plus 8 star clarified on the living arrangements for the kids. He and Kate don’t live all that far away from each other. But, the twins Mady and Cara and the rest of the sextuplets don’t get together with him. Collin seldom sees them, though Hannah sometimes catches up with her siblings. Jon Gosselin told ET, “I wish that all my kids would just be together, hang out together, go to the mall. Just hang out together.”

A quick, short but amazing and also needed quick vacation! Love my family and our friends in Ponte Vedra!!!

In the meantime, Collin looks very happy as he grows into a healthy and strapping young man.