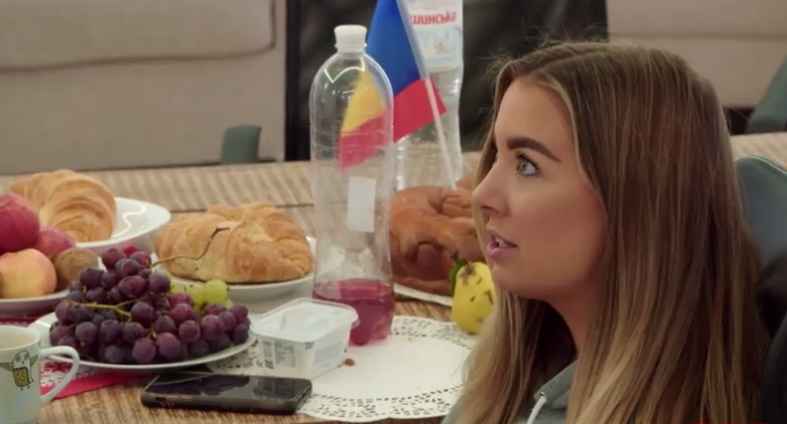 90 Day Fiance: Happily Ever After? fans certainly can’t forget Elizabeth’s sister, Jennifer Davis. This is due to her extremely rude comments about Moldovan food. This happened in the recent episode, where Jenn basically called Moldovans peasants. She caught a lot of flak for her comment on social media and is now trying to defend her comments. While apologizing, she says she assumes fans “wouldn’t eat it either.”

Elizabeth Potthast Castravet’s sister Jennifer Davis thoroughly insulted Moldovan cuisine in the last episode of 90 Day Fiance: Happily Ever After?  Basically, she called the cuisine “disgusting” and pretty much referred to it as “peasant” food. Jenn was not alone, however, as her dad, Chuck Potthast and brother, Charlie Potthast agreed. If you missed it, catch that particular scene here:

They had just settled into their Airbnb after arriving in Moldova and sit down to a table, groaning with good food. They all complained, but Jenn particularly whined about the cuisine. She went so far as to say she will lose weight in Moldova because she can’t eat any of the food. Jenn also theorized that Moldovans eat pork fat because it is cheap.

So, basically, Jenn and her family are in Moldova to celebrate her sister’s second wedding but instantly complain. Jenn was bombarded with negative comments and backlash after viewers heard her entitled comments

In an Instagram video shared by In Touch Weekly, Jenn apologizes for her rude words. The only problem is she also assumes fans “wouldn’t eat it either.” This Redditor obviously disagrees! To most people, that table of food looks decidedly tasty.

In the video, Jenn can be heard telling fans they “gotta understand something.” She says she had literally just gotten off a “long-a** flight.” Jenn said she was “meeting a million people for the first time” while having a “film crew in your face.”  She said this is while having not eaten anything “normal.” Well, normal to Jenn, of course.

Jenn goes on to apologize for offending people. However, she insists she was “mind-f**ked” having food in her face that she had never seen before. She referred to a piece of raw pig fat on a cracker, saying she is not used to that. She says, sorry, she didn’t feel like eating it and says everyone is “going bonkers about it.” She then told viewers that if they were in the same situation, they “wouldn’t eat it either.”

Many 90 Day Fiance fans realize what it is like to be hit by cultural shock in a foreign country. However, that doesn’t give a person license to insult a country she has just entered, on reality TV. To make matters worse, she later shared an image of herself, telling fans, “I’m watching the show with you guys. I know. I sound like a pretentious bitch. Just sit back, relax and enjoy the show.”

However, she also got a jab in at her haters, by writing, “Enjoy watching me on your TV, though. I’ll be in your living room next Sunday, too. I know you can’t wait!”

If you “can’t wait” for more of Jenn’s feedback on Moldova, catch 90 Day Fiancé: Happily Ever After? on Sunday at 8 pm ET on TLC.