OutDaughtered fans recently took their first breath of fresh air when Danielle Busby took to Instagram to confirm their family was safe and sound. She, however, proceeded to give a devastating update about their hometown. She revealed Lake Charles was destroyed by Hurricane Laura. And, it would take the community coming together to pick up the pieces. According to the Busby mama, a lot of people lost everything or nearly everything to the destruction of the hurricane. Their beautiful hometown would be forever changed.

Danielle Busby shared a collection of photos with her followers.

On Danielle’s Instagram page, she shared a collection of photos a few hours ago. Photos of their once beautiful hometown. These photos were a cry for help on behalf of her hometown. “Lake Charles needs help,” she begged.

With 1.7 million followers, it isn’t too surprising that the collection of photos attracted so much attention. Inside of four hours, the photo was liked over 40,000 times. It has also amassed nearly 1,000 comments. Now, there are a few reasons this number has climbed so quickly. For starters, fans have been watching Adam and Danielle’s pages for days. Worried. Waiting for an update.

One photo in particular quickly drew in OutDaughtered fans. Eight photos into the collection… Fans discovered a photo. And, they found the photo moving. It was a beautiful photo. A chilling photo. And, it had a powerful message.

OutDaughtered fans are in awe of the chilling photo.

Eight photos into the collection, Danielle shared a snap of a statue of Jesus. The statue was still standing and seemingly fully intact. The statue was surrounded by debris and fallen trees. It, however, managed to weather the storm. And, OutDaughtered fans found the photo to be chilling. 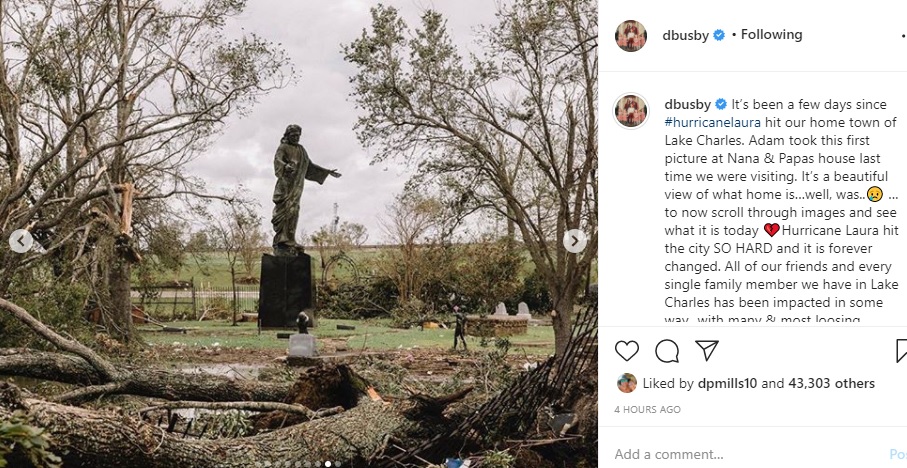 One Instagram follower was quick to call attention to the photo: “The fact that the statue of Jesus (pic 8) is still standing is so beautiful. Jesus is and always will be more powerful than a storm.”

Instagram followers of Danielle Busby liked the comment nearly 100 times inside of four hours. A few others responded to the comment. They agreed it was a powerful photo. And, they were happy Danielle took the time to share it with everyone.

The comment section was flooded with fans sending prayers to Danielle and her home town. A few asked questions. Most just wanted to know how to send donations from out of the state or in other parts of the world.

It’s been a few days since #hurricanelaura hit our home town of Lake Charles. Adam took this first picture at Nana & Papas house last time we were visiting. It’s a beautiful view of what home is…well, was..😢 … to now scroll through images and see what it is today 💔Hurricane Laura hit the city SO HARD and it is forever changed. All of our friends and every single family member we have in Lake Charles has been impacted in some way…with many & most loosing everything! Every business and structure in Lake Charles has been damaged. The city is destroyed. AND There is NO POWER! NO WATER!  *Lake Charles NEEDS HELP y’all!* Thankful everyone is safe, but now we are asking for your support💪🏻 👉🏻WAYS TO HELP👈🏻DONATIONS: My sister Ashley (Aunt LiLi) has decided to transform @heist_hair_bar Waiting/Reception Area into a Donation Collection Site.. ✨YOU MUST WEAR A MASK✨to enter the Salon to drop your donations or you may leave it by the front door for us to retrieve. ✨As of now, Donations will be accepted during business hours at Heist through 9/12/2020✨ If you feel obliged or moved to contribute, any of the following items would be greatly appreciated: (Posting list in the comments) ✨The Busbys along with Heist will be transporting all Donations continuously over the next few days & weeks to a designated donation distribution site in Lake Charles and Moss Bluff (TBD). VOLUNTEER ALSO, @eightdaysofhope is heading to Lake Charles. #yay If you are feeling called to volunteer to help rebuild the city, visit their page to sign up! 🙏🏻 I pray all us around can ‘BE THE CHURCH’ and come together in community to pray, serve, give and be there for one another. 🗣Please Spread the Word & SHARE!! XOXO ~D~ #itsabuzzworld #bethechurch #loveoneanother #hurricanelaurasupport #lakecharlesstrong #texasstrong

Overall, however, fans were just happy for the update. So, did the picture Danielle Busby shared give you chills too?