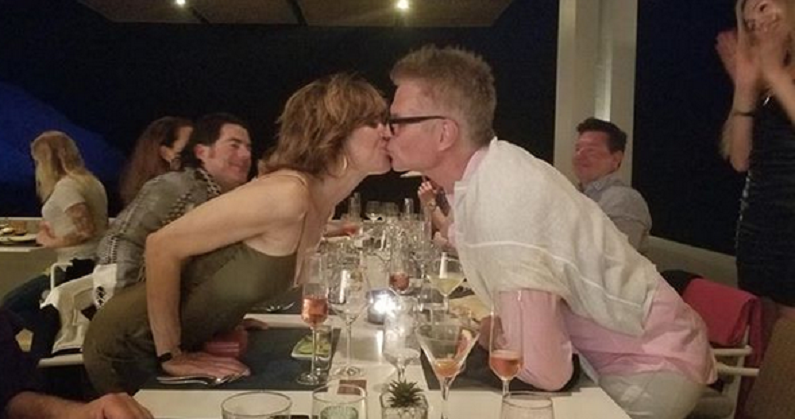 Lisa Rinna doesn’t like it when anyone brings up her husband. The 57-year-old clapped back at a fan who wanted to talk about Harry Hamlin. RHOBH fans know that Rinna won’t stop talking about Denise Richards. She’s posted several shady posts about the soap star on Instagram.

But Rinna doesn’t like getting trolled. RHOBH fans have slammed her for the way she handled Brandi Glanville and Denise Richards’ alleged affair drama. She inserted herself and even gave her opinion. Rinna ended their 20-year friendship by siding with Brandi.

Now, that fans are demanding Bravo to fire Rinna, she showed her haters who’s the real queen of RHOBH.

Lisa Rinna took to Instagram to make another shady post about Denise Richards. Despite the backlash, she took a shot at The Bold and the Beautiful actress. As per The Blast, Rinna posted a clip from the three-part reunion in which she shouts, “Lisa f****ing Rinna!” She captioned the video, “That’s right b***h. Say it again.”

Rinna followed up with another clip from Wednesday night’s finale. In the scene, the two RHOBH co-stars hashed out their differences. Rinna confronted Denise about the “cease and desist” that Denise allegedly sent to the Bravo producers and Brandi.

“So you sent a cease and a desist?” Rinna asks Denise, who doesn’t respond.

“You want the footage taken out,” she declares.

“Who told you that?” Denise said. That’s when Rinna laughed, pierced her eyes, and said, “Oof! You’re so angry!”

RHOBH fans criticized Rinna for posting the clip. Some of them decided to bring up her marriage to Harry Hamlin. One follower wrote, “Anyways, let’s talk about the husband.”

Another user chimed in, asking, “So… How’s your marriage going?” She claimed that their marriage is going “great.” Then she shared a throwback photo of a shirtless Harry Hamlin with the caption, “‘Let’s talk about the Husband.’ Making Love. 1982.”

Lisa Rinna lashed out at Kim Richards years ago

Fans know that Lisa Rinna’s marriage is a sore spot. They remember the time when Kim Richards alluded to Harry Hamlin cheating on Rinna during their trip to Amsterdam. That’s when Rinna yelled the iconic line, “Never go after my f***ing husband.” Kyle Richards scrambled to grab her sister and ran out of the restaurant.

Rinna is having a “multilayered f***ing nightmare” at home

The reality star did admit that something is not quite right at home. Lisa Rinna had an electrical pole in her own backyard. She dealt with the eyesore for about a year. Thankfully, it has been removed.

“What world do you live in that you can just snap your fingers, and your f***ing pole is gone?” she asked her followers.

But it required the help of the cable company, the phone company, and the power company. Rinna explained the difficult process of having it removed. Not only wasn’t it fun for her, but it wasn’t fun for her neighbors as well. Rinna called it “a multilayered f***ing nightmare.”

Part one of The Real Housewives of Beverly Hills three-part reunion airs Wednesday, September 2 at 9:00 p.m. ET on Bravo. So make sure you tune into Bravo.