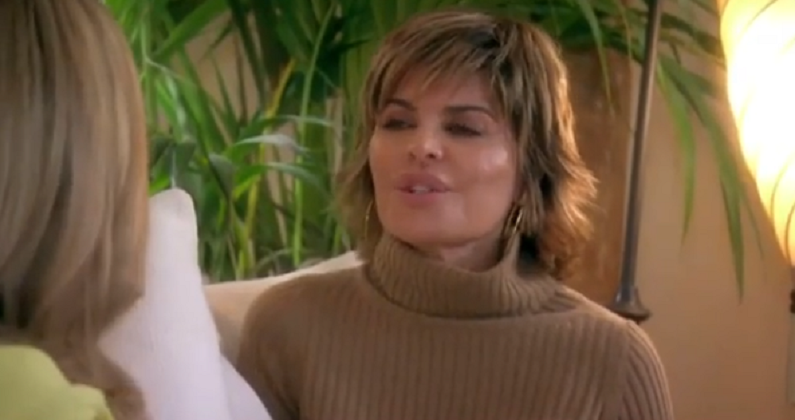 Lisa Rinna wants to know why Denise Richards is mad at her and not at Brandi Glanville. The Real Housewives of Beverly Hills Season 10 has been packed with drama. Most of the drama is centered around Denise. First, she got mommy-shamed for telling her co-stars not to discuss threesomes in front of her three children.

Then Brandi Glanville came back with a vengeance. She told Kyle Richards that she allegedly had a months-long affair with Denise. Brandi also alleges that the Wild Things actress talked about them behind their backs. Once Lisa Rinna found out, she questioned her 20-year friendship with Denise.

Fans aren’t happy with the way that Teddi and Rinna handled Brandi’s claims. As for Rinna, she feels that Denise should be more upset with Brandi than her.

Lisa Rinna questions why Denise Richards is mad at her

The RHOBH star responded to an Instagram post. @HousewifeHaikus shared a meme that showed a photo of Denise Richards along with the phrase, “Rinna played dirty? Cease and desist much, Denise? Oooh, she’s so angry.” It’s safe to say that @housewifehaikus is on Rinna’s side.

The reality star took to the post to comment, “Why isn’t she mad at Brandi? I could never figure that out, so mad at me and us but not Brandi. It’s like she’s protecting Brandi.”

‘Who told you that?’ #CommentsByCelebs #RHOBH

But not everyone agreed with the post or the comment. Some called for Rinna to be removed from the show. Others told Rinna to give it a rest. While the season ended months ago, it’s clear that these ladies haven’t moved on from the drama. But it’s hard to when it’s still playing out on TV and in the media.

Now, fans of the show are demanding a cast shakeup for Season 11. It’s only fair since The Real Housewives of New York City is experiencing its own cast shakeup. Following Wednesday night’s finale, many fans slammed Rinna for her “mean girl” ways. They’re begging Bravo to remove the 57-year-old from the series.

Fans have criticized Rinna all season for how she handled the Denise and Brandi situation. Denise accused Rinna of not having her back. Even though Rinna admitted she needed to be a better friend, fans wondered if she was being sincere. But after the RHOBH Season 10 finale, fans want her off the show, as per The Blast.

“Mean Girl, Bully, Fake… just a few names to call you,” one fan wrote on Twitter. “@bravo needs to fire you! You try to destroy other people’s lives every season! I hope KARMA comes on strong to you, then we will be sitting back eating popcorn!”

“@lisarinna now if we could close the book on you!” added another fan. “@bravo get rid of @lisarinna she’s stale we’ve had enough.”

Fans have also called for Kyle, Teddi, and Erika Jayne to be fired from the show.

Part one of the explosive three-part finale of The Real Housewives of Beverly Hills airs Wednesday, September 2 at 9:00 p.m. ET on Bravo.